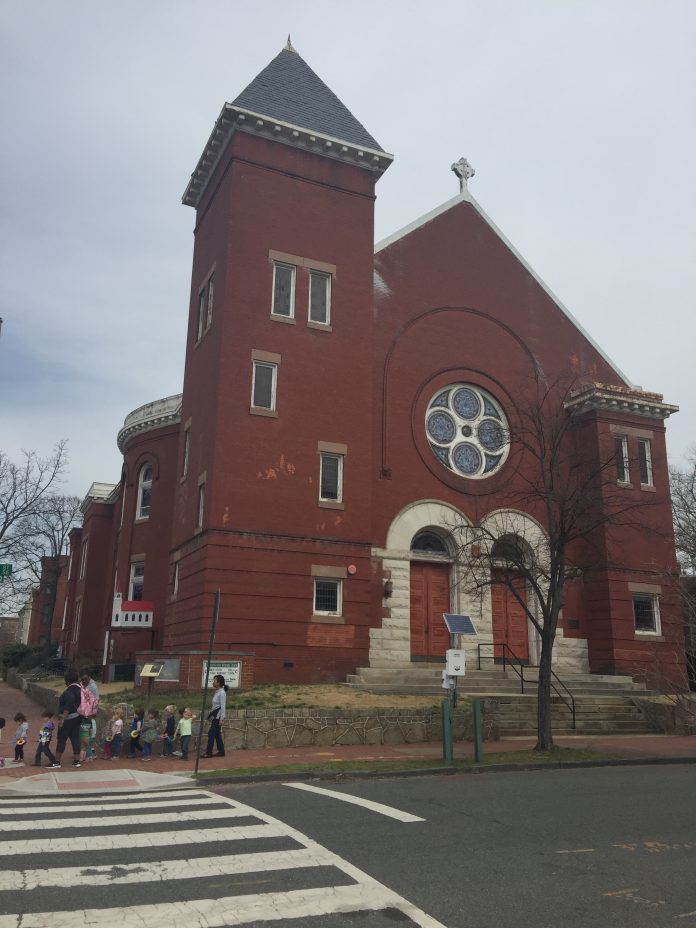 On Feb. 22, the Historic Preservation Review Board (HPRB) approved a revised application by Ebenezer Methodist Church, 400 D St. SE, for an interior parking lot and a new curb cut. The Board did so in the absence of any consideration of the revised proposal by ANC 6B, which by statute must be accorded “great weight” in any such decisions. Both the commission and the Capitol Hill Restoration Society (CHRS) had taken a position against the church’s earlier proposal.

ANC 6B had heard a presentation by Ebenezer Methodist Church and its partner Evergreen Urban on their proposed parking arrangements for ‘Ebenezer Flats’ at its Jan. 9 meeting. These involved both a curb cut and the construction of an electrical parking lift in the rear of five new townhouses. The ANC voted to oppose (4-2-2) the lift structure due to the impact on adjacent green space and the opposition of neighbors.

Rather than waiting for the commission to consider the church’s revised parking plans, HPRB voted (6-0-1) to approve the revised application. The new proposal dropped the idea of a mechanical parking structure entirely. Instead, the church requested a curb cut to allow access to 16 at-grade parking spots.

The Hearing
At the HPRB hearing, Board Chair Marnique Heath asked the applicant why they had not returned to the ANC to discuss the changes. The ANC had given its view on the curb cut on two occasions, replied Evergreen Urban’s Eric Jenkins. The major change involved the removal of the mechanical lift structure with no revision to the curb cut or the parking layout, he pointed out.

“We didn’t think we were adding anything or making revisions that had not already been two times addressed,” Jenkins said.

Testifying for the commission, ANC 6B Chair Daniel Ridge (6B09) pointed out, “While the project has changed, there is no reason today to set aside the ANCs specific objection to the creation of a curb cut and a new private driveway.”

The ANC Single Member District (SMD) in which the project is located is currently without a representative following the resignation of Diane Hoskins last month. Advisory Neighborhood Commissioner James Loots (6B03) SMD includes the residential area across the street from the development.

Two residents spoke in support of the application. One represented that she spoke on behalf of 16 current residents, who supported the mechanized lift, the curb cut and lot. She said these community members wanted to support the church in an attempt to relieve parking needs and provide for elderly and infirm parishioners.

“[The church] is an anchor of the community, and I think we need to support it and preserve it,” she said.

Five residents testified against the curb cut. One pointed out that he had collected more than 70 signatures in opposition. The curb cut would change the nature of the block by posing a hazard for neighborhood children at its entry/exit points, they claimed. They also expressed concern that the church would rent spaces to commuters. The removal of the mechanical device, argued one witness, constituted a substantial revision to the application meriting both a reapplication and an additional hearing.

‘One is White and One is Black’
Members of HPRB spoke in support of the application. A number noted that the residents considered Ebenezer Methodist Church a good neighbor.

Board member Linda Mercado Greene stated that she believed the church had gone “far and beyond the call of duty” in its efforts to be a good neighbor. Greene was “incensed and appalled” by the testimony of the proposal’s opponents.

“African American religious institutions are being forced out of the community, out of the city because of parking. I don’t see where the difference between Ebenezer having parking for their parishioners is different from United Methodist having parking, except for one is white and one is black, and I’m just going to say it,” Greene stated.

Heath joined Greene in her criticism stating that many African-American parishioners were pushed out of the neighborhoods adjacent to their churches by rising costs and gentrification. This forces them to drive to and park near churches they and their families may have gone to “in some cases for hundreds of years.”

“I think it is important that we acknowledge that and that we as a city find ways for that to happen and for these churches to continue to exist,” Heath stated. DDOT will address safety issues appropriately through their process as applied to the curb cut, she said.

ANC 6B Ignored
On Feb. 21, Commissioner Loots learned that HPRB would consider the revised parking plan from an email blast notifying recipients of the board’s agenda. He immediately complained to the DC Office of Planning (OP) of the notice. In his email, Loots termed this “not only unconscionable disregard of the ANC and its constituents, (but) it is in violation of law and regulation requiring ANC 6B be provided notice and opportunity to comment.” He characterized the board’s action part of a pattern of recent instances that “have had a serious negative effect on the Capitol Hill Historic District and on my constituents.”

“In light of my repeated past expressions of concern over staff-level approval and failure to disclose developer plans to ANC 6B prior to HPO approval, I can only conclude this case represents another in a series of staff decisions with respect to the Capitol Hill Historic District that are intended by your office and the developers to silence potential neighborhood opposition and keep ANC 6B from participating in the process,” Loots wrote.

In a follow-up email to the Hill Rag, Loots cited a lack of communication from the developer and church as well.

“The developer didn’t even bother to show up at the first ANC meeting, and both the church and the developer have been vague and secretive as to their real plans from the start,” he said. “They have failed to keep the ANC or the community apprised of their intentions, and after defeat of the original commercial parking lot proposal, have now gone behind our backs in another attempt to keep the community from expressing its position.”

Loots has requested a meeting with the DC Office of Planning (OP) to discuss HPRB practices in advance of the March meeting of ANC 6B.

The Hill Rag has reached out to OP for further comment.

The Cicadas Are Back