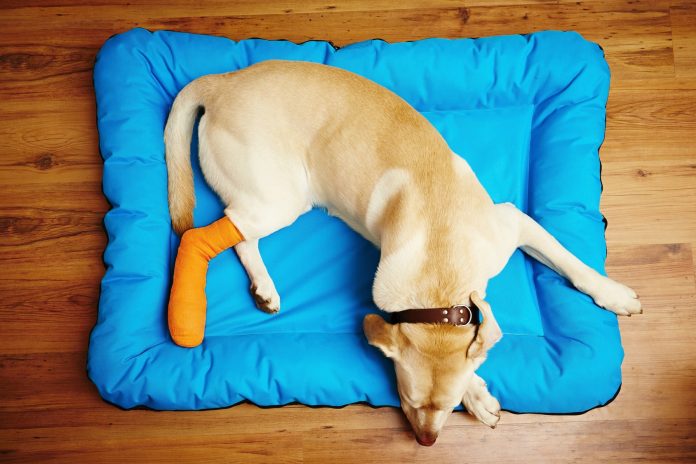 Dogs are prone to many orthopedic injuries, but none is as common as rupture of the cranial cruciate ligament (CCL). The knee is a complex joint, composed of a number of ligaments and cartilage padded areas. When there is damage to the CCL, the knee becomes unstable, leading to discomfort, damage to the cartilage, and eventual arthritis.

The CCL in dogs is analogous to the ACL in humans. This ligament is frequently torn in athletes during a traumatic episode (think football), but in dogs, the ligament begins to weaken when they are young, leading to possible rupture during mundane activities.

The CCL serves to stabilize the bones of the knee. The femur (long bone that extends from the hip joint to the knee) sits on top of the tibia (shin bone) and is prevented from sliding off the tibia by the CCL. The ligament also helps prevent twisting of the bones on top of each other. When the ligament is torn, the femur has excess mobility leading to possible damage of the protective coating of cartilage in the joint, inflammation, and pain. Walking becomes more difficult as well. As the inflammation and instability persist, the body reacts by producing scar tissue in an attempt to stabilize the joint. After some time, the joint develops arthritis, leading to chronic pain.

We frequently see dogs for CCL damage and the history may involve jumping playing, or nothing at all. Since the ligament weakens in many dogs at a young age, it may simply rupture when out for a walk. In working or highly active dogs, the damage may be secondary to trauma or a hard landing, but frequently, the dog is simply lame after a walk. Common breeds for CCL damage include all pit bull breeds and retrievers. Large breed dogs are also over-represented, but we do see problems in small dogs, too.

Diagnosis of a ruptured CCL is based upon history and an orthopedic examination. X-rays are useful, but do not show the ligament damage as most ligaments do not appear on X-rays. During the examination, the veterinarian will assess if the joint is stable by flexing and extending the knee, along with testing if there is drawer or tibial thrust. The later two techniques show if the femur slides back and forth on top of the tibia.

Once a presumptive diagnosis of a CCL tear is made, X-rays are frequently taken of the knees and the hips. It is important to be certain that there are no other abnormalities within the knee and to ascertain if the hips are normal. If you fix a damaged knee, but the hip itself is problematic, you may not have made a positive difference in the walking or comfort of the dog – or the hip itself is the real problem, and not the knee!

Initially torn CCLs are managed with rest, an anti-inflammatory medication for pain and inflammation control, and a glucosamine supplement such as Dasuquin Advanced. Not all CCL tears are complete and with time, medications and rest, some may stabilize and not require further intervention. Regenerative medicine – including stem cells and platelet rich plasma, along with physical therapy and rest may greatly aid in recovery of dogs with less than 50% partial CCL tears. For those with a complete tear, surgical intervention is necessary to obtain the best outcome.

Several surgical techniques are employed to stabilize the knee joint, but the tibial plateau leveling osteotomy (TPLO) is the most common procedure. In our opinion, the TPLO hasthe best outcomes of any surgical technique. The TPLO does not recreate the broken ligament, but changes the position of the top of the tibia bone so that the femur sits more flatly upon the tibia, eliminating the need for the CCL. This is performed via making a circular cut in the tibia, rotating it into position, and securing it with a steel plate and screws. Post operation the pup is placed on pain medications, joint supplements, omega-3 fatty acids (Welactin brand is most recommended), Adequan (an injectable joint supplement), rest, and given physical therapy. Dogs recover quite quickly and frequently resume their pre CCL rupture activities within three months.

Remember earlier where it was discussed that CCL rupture is usually a degeneration of the ligament? Well, in 50-60% of dogs that damage one CCL, the other will be damaged within 15-18 months. The best treatment is to repair a CCL when it ruptures and then repair the other, too.

CCL ruptures are common in dogs, but can be effectively treated in all sizes of dogs. If your pup is suddenly lame in a hind leg, the CCL may be to blame.