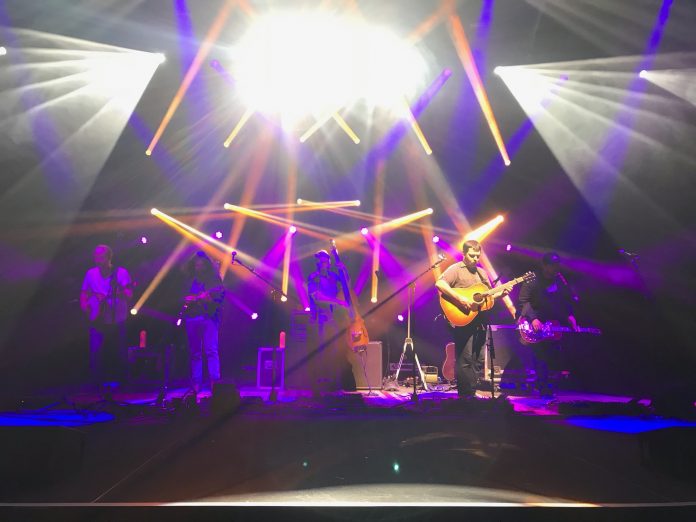 The band booked the 9:30 Club on Feb. 2 and The Anthem on Feb. 3. Embracing the Lay’s slogan as a life philosophy, this reviewer took this unique opportunity to see them twice.

Hailing from the wilds of Michigan, Greensky features Anders Beck on dobro, banjoist Michael Arlen Bont, guitarist Dave Bruzza, Mike Devol on the upright bass and mandolinist Paul Hoffman. The strumming of Bruzza’s guitar and pounding beat of Devol’s bass drive Greensky’s sound. No foot can remain still. No head can fail to nod under their twin assault. Around this foundation the mandolin and banjo sketch delicate melodies. The idiosyncratic dobro adds the funk and rock to top off the ensemble, differentiating the band from its contemporaries.

“You can call us an acoustic ensemble, or a drum-less rock band, or a rock & roll bluegrass band,” says Hoffman. He and Bruzza are the band’s main songwriters. Their lyrics depict a jaded world of heartbreak and angst, while their melodies shade from traditions of bluegrass to melodic rock anthems.

Mumford and Sons, The Decembrists and Nickel Creek have paved the way for the appreciation of string bands by the young. Combined with a recent resurgence of affection for The Grateful Dead, Greensky drew a mixed crowd of gray hairs and members of Generation Z, the latter outfitted in toques, flannels, long beards and trucker hats offset by piercings and tattoos.

Greensky opened their performance with “Groundhog.” This bluegrass number with driving instrumental solos gave the band a nice warm up. Old time music remained an evening theme as they covered “Bringing in the Georgia Mail,” a storied Lester Flatt and Earl Scruggs number.

The band dug down in their extensive repertory for the remainder of the concert. “Blood Sucking F(r)iends,” “Worried about the Weather” and “Bottle Dry” pleased hardcore fans. This old Deadhead was delighted by a blazing cover of “China Cat Sunflower.”

The 9:30 Club proved the perfect venue for Greensky–intimate, yet atmospheric. The sold-out crowd sang along, dancing to the band’s driving rhythms. The sound was differentiated and subtle. The only problem was a slight muddiness in Bruzza’s vocals.

The real treats in the Greensky’s 9:30 Club performances came in their extended transitions between tunes. There, amid jazzy string interludes and acid-focused solos, they stretched the boundaries of bluegrass as a genre as they slowly built up to each new song. Here, their playing reminded this author of the many Grateful Dead shows of his youth, minus the drum solos.

Playing “Past My Prime” for the encore, Hoffman crooned of life disappointments,

The club thundered as the audience joined in on the chorus, “But I’m out way past my prime / Looking for reasons I didn’t get my time.”

Greensky opened the show by paying tribute the capitol with an acapella rendition of the national anthem. This was an idiosyncratic choice for a band that usually takes a dim view of politicians and their foibles.

Planting a flag, the band followed up with a rousing cover of “We’re an American Band” by Grand Funk Railroad. This tune allowed Buzza and Beck to really stretch their legs musically, demonstrating “funk grass” for the masses.

Unlike the evening before, the Anthem set list was more focused on Greensky’s hits. Highlights included “The Four,” “Wings for Wheels” and “Kerosene.” “Jaywalking” got an extended treatment. The crowd joined in on “Windshield” and “In Control.”

The Anthem also had a very different vibe from its smaller sister venue in Shaw. The stage is set farther back from the front rail. The audience was more suburban. Fewer piercings and less flannel. It also skewed younger.

For the show’s encore, Greensky returned to social critique covering Black Sabbath’s “War Pigs.” In a world in which the draft-dodging, current resident of the White House employs tweets to chart a course towards mass destruction, the band pointedly sang:

Politicians hide themselves away
They only started the war
Why should they go out to fight?
They leave that role for the poor, yeah

While the White House incumbent may not have heard the musical strains from blocks away, the irony of bookmarking their concert with the national anthem and an anti-war screed was not lost on an audience that enthusiastically echoed the lyrics.