New officers were elected at the regularly scheduled meeting of Advisory Neighborhood Commission (ANC) 6C held at the Heritage Foundation (214 Massachusetts Ave. NE) on Wednesday, Jan. 10. All were uncontested and affirmed by unanimous vote.

Community Announcements
Vincent Morris, a resident of ANC 6C and a government affairs employee with DC Water, presented on issues of water problems brought on by the recent cold weather as well as issues related to new water meters. Morris said that since Dec. 1, DC Water had repaired 141 breaks, leaks and valves throughout the District, 77 of them since Dec. 30.

He thanked the public for reporting leaks and breakages. He noted that sometimes crews were delayed in responding to calls because they were working elsewhere or first had to consult with utility companies, especially in cases where excavation was necessary.

Morris said that DC Water was in the process of replacing all of the water meters, the devices used to assess water usage and billing, throughout the District, saying that residents may have noted the covers in their tree boxes or sidewalk in front of the house.

Morris said that a transmitter on the meter sends a signal to DC Water several times a day, providing information on usage. If that system is covered by soil, mulch or landscaping the meter will be unable to transmit, and DC Water will not be able to detect sudden spikes in usage that might indicate a leak.

Everyone has a meter pit in front of their home, he added, whether in the tree box or sidewalk. That meter pit is technically public space. Morris said that water-main breaks or leaks or ill-fitting water meter covers should be reported to DC Water. He recommended that residents use the Water and Sewer Emergency number, which links directly to the DC Water Command Center and is staffed 24/7. That number is 202-612-3400.

Alcohol Beverage Licensing Committee
Travel Traders Retail, located in the Hyatt Regency Hotel (400 New Jersey Ave. NW), seeks an amendment to its settlement agreement in order to allow single sales of alcoholic beverages. Steve O’Neal, chair of the Alcohol Beverage Licensing Committee, noted that representatives from the Community for Creative Non-Violence (CCNV), the shelter located a block to the west of the hotel, attended the meeting to voice opposition to the amendment. Commissioner Edelman asked if the commission wished to set such a precedent, given that there is a liquor store across the street from the hotel. Although the committee discussed limiting single-sales to hotel guests, they voted unanimously to oppose the amendment even if the limitation were added.

The commissioners also considered matters related to a liquor license renewal by Giant Foods (360 H St. NE). The ANC had previously voted to oppose the application, wanting the retailer to address issues of traffic and pedestrian safety during deliveries and parking. Although the ANC had sent a letter to the food retailer in early December, it had not yet received a response. The committee sought authorization for about $5,000 in funds to hire counsel in preparation for legal action. After confirming that the usual counsel would be approached on the matter, the ANC moved unanimously to authorize the request.

Transportation and Public Space Committee
Indigo Restaurant (243 K St. NE) sought approval of its application for converting an unenclosed sidewalk cafe into an enclosed one. The enclosure would be in two parts. The restaurant exterior on Third Street NE would have a canopy with clear plastic sides, all of which could be rolled back. The portion along K Street that is currently open would have solid walls made of plexiglass that could be removed according to weather.

The committee expressed concern with the lack of detail in the application, noting that the owner said he had District Department of Transportation (DDOT) approval for an ADA ramp shown in the drawings, but had not offered proof. Nor did the owner bring a public space license for a sidewalk cafe, which would be required for the enclosure.

However, noting the popularity of the establishment, the committee still wanted to support the application, but only after receiving copies of correspondence in regard to licensing, the ADA ramp and detailed plans.

Commissioner Edelman said she wanted more detail on the appearance of the enclosure. Price said he would be interested in the opinions of homeowners in the area. The commissioners voted unanimously to oppose the application in the current form but said they would withdraw their opposition if the applicant would request a delay in his public space hearing to allow more information to be presented to the ANC.

Parks and Events Committee
Joe McCann, chair of the Parks and Events Committee, provided an update on committee business, noting that the M Street and L Street NE underpasses would receive lighting replacements beginning in mid-January. This will require rolling closures of sidewalks, but at least one will be open at all times. Commissioner Edelman asked if the District had made arrangements with the community living under the underpasses regarding resettlement and placement of their possessions. McCann said the committee was talking with the mayor’s office about the topic.

Noting that the Department of General Services (DGS) had formed a task force to address the use of recreational fields at District public schools and would present findings in March, the committee recommended the ANC send a letter in support of the task force. The letter would offer four recommendations:

Commissioner Price added a friendly amendment requiring a quarterly report on field use to be received by the ANC in which the school is located. The ANC endorsed the letter unanimously.

ANC 6C generally meets at 7 p.m. on the second Wednesday of the month (except August) in the ground-floor conference room at the Heritage Foundation (214 Massachusetts Ave. NE). The next meeting of ANC6C will be an exception. It will take place at 7 p.m. on Thursday, Feb. 15. 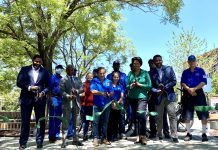 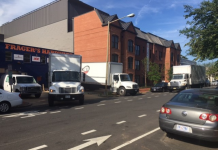