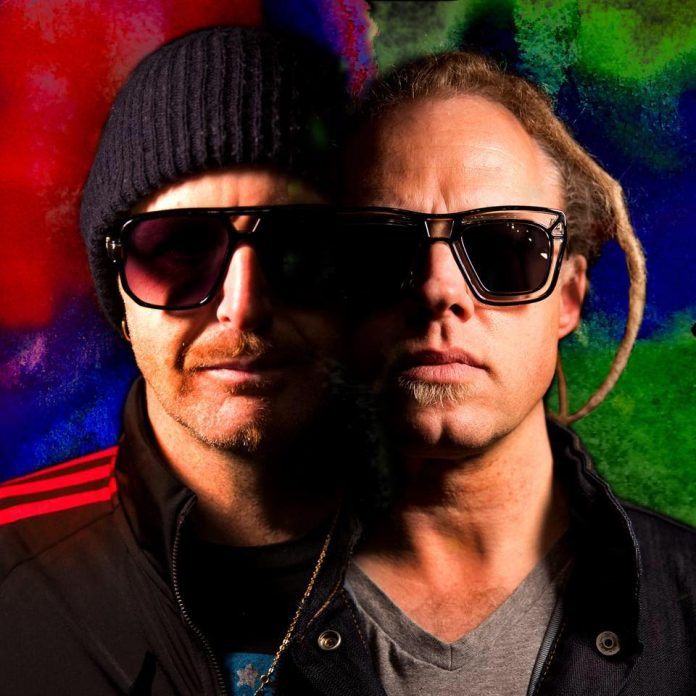 By the time headliner came on the stage at the 9:30 Club on Jan. 19, the crowd on the main floor was shoulder to shoulder. Ready to get their groove on, they danced nonstop to the beats and funky guitar riffs created by the rock/electronic duo of Zion Rock Godchaux and DJ Harry, a.k.a. Boombox.

Godchaux arrived wearing his signature bucket hat along with the familiar feather boa draping his microphone. As a homage to DC, he sported a vintage ‘Bullets’ tank shirt. The setup is simple, DJ Harry surrounds himself with sequencers, groove boxes, turn-tables and keyboards. Godchaux stands armed only with a guitar and microphone. The abstract backdrop and the moving beams of light provided the perfect atmospheric visuals to complement the music.

From the beginning of the first set, Boombox’s hard driving beat stirred up an enthusiastic crowd. No dialog was exchanged with the audience. Each song flowed into the other. Boombox does not use setlists at their concerts. Godchaux and DJ Harry improvise and morph their sets based on the audience’s energy. DJ Harry initiated each song with a rhythmic foundation. Godchaux joined in with improvisational guitar and vocals.

Boombox played several songs off their latest EP Bits & Pieces including the title track and “Thick as Thieves.” The later has an aggressive and emotionally charged pulse reminiscent of “I Feel Love” by Donna Summer. The funky, reggae infused rhythm of “Waiting Around” from their 2014 Filling in the Color brought the house down. This song featured heavy brass and talk box effects. “Mr. Boogie Man” from their 2010 downriverelectric, influenced by seventies disco and soul, reminded loyal followers why they have stayed the band since 2005.

The studio Boombox is quite different from the group’s live shows. Their recordings sound more relaxed with prominent vocals. When the band is on stage, the big beat and driving bass creates a hypnotic force that transforms crowds into churning, whirling dervishes. It is a truly immersive experience. Boombox’s unique blend of repetitive rhythms and psychedelic rock will keep this writer coming back for more time and time again.

Jan Aucker lives in Washington, DC and is a freelance writer for East City Art.  She is a music enthusiast who frequents live shows keeping abreast of the current music scene.