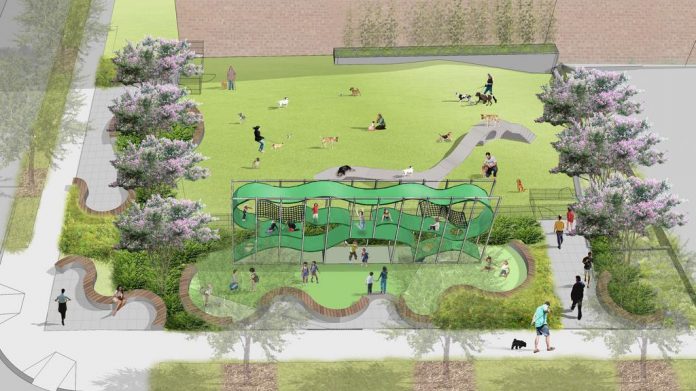 After crowdsourcing dozens of possible names for a new park at the corner of Third and L Streets NE, the NoMa Parks Foundation (NPF) put three of the best options to a public vote. NPF has announced that “Swampoodle Park” will be the name of the community playground and dog park, currently under construction. Swampoodle  was the name of an Irish neighborhood DC in NoMA in the second half of 19th and early 20th century. More than 1,500 votes were cast for a name in a three-week online poll, with 67 percent of respondents selecting “Swampoodle Park” over “Old City Corner” (21 percent) and “3rd and L Park” (12 percent).

Swampoodle Park was designed by District landscape architecture firm Lee and Associates. Now about midway through the construction, the space will open in early 2018. Swampoodle Park will be owned by the District and managed by the Department of Parks and Recreation. Friends of NoMa Dogs (FOND), a neighborhood nonprofit that launched in early 2017 in response to the park’s creation, will maintain the dog park portion of the space.