Thumbs Down for The Bard
Erkiletian Development and The Shakespeare Theater Company, joint developers of The Bard, a project designed by Shalom Baranes at 501 I St. SW, have requested a “set down” with the DC Office of Planning (OP). Under the new zoning regulations, the opinion of advisory neighborhood commissions must be accorded “great weight” by the agency on its decision whether to grant such a review.

Commissioner Fast introduced a motion to oppose the granting of a set down for The Bard. More than 240 neighbors signed a petition against the project and 13 members of the community immediately surrounding the site testified against the project. Their objections included:

“They are trying to cram something into an inadequate space,” stated one neighbor. Fast stated that she had prepared a report for OP summarizing these objections. “The project is at variance with the Southwest Small Area Plan,” she stated while outlining her opposition. The commission voted unanimously to oppose any set down.

One Hill South Phase II
Representatives from Ruben Companies presented plans for One Hill South Phase II, located at 950 South Capitol St. SE. This is the parcel just south of the demolished McDonald’s that abuts the developer’s existing rental apartment building. The 697 square foot structure is projected to include 300 rental apartments and 190 parking spaces in a three-story, below grade garage. The first floor will either be retail or house a building amenity depending on market demand. There will be a rooftop pool.

The developer is not requesting exceptions or variances. No new curb cuts are planned.

A key feature will be a monumental vaulted entry to the courtyard between the two buildings accessible from K Street. The amenities planned for the second floor are contiguous to those of its sister building. It is really one building built in two phases.

The commission was perplexed by the design. Moffatt opined that the new structure was “too blocky.” “It is like a big block of ice,” he added. Fascett agreed. “It appears heavy and looks like a wall,” she said. Neither she nor Fast liked the design’s rounded corners.

The developer pointed out the use of stone on the building and an in-and-out playful rhythm created by three-foot setbacks every two stories. There is also a change in both material and color bands every two floors.

The commission took no action. A vote is scheduled for the commission’s January meeting in advance of the Zoning Commission’s deliberations on Feb. 5.

Buzzard Point Road Closures
Representatives from the DC Department of General Services (DGS) gave an update on road construction surrounding the new DC United Stadium on Buzzard Point. Half Street SW will reopen by Jan. 1. The first week of that month will see the closures of Second Street from R to T streets and R Street between First and Second streets SW. This will continue for 45 days.

The closures are to facilitate the total reconstruction of Second and R streets SW. The streets have no base and need to be fully rebuilt.

Commissioners raised concerns about access to Buzzard Point for emergency vehicles during the road closures. DGS representatives stated that half of Second Street will be drivable throughout the reconstruction. This is necessary to provide site access for their own construction vehicles.

Litsky and Hamilton raised concerns about concrete trucks cutting through neighborhood streets near the Greenleaf Recreation Center. “To the extent that those trucks are yours, fix it! We are going to have people in Southwest block the streets if this in not handled,” Litsky stated.

Public Safety
Metropolitan Police Department (MPD) Sector 3 Capt. Michael Pulliam briefed the commission on crime in Police Service Areas (PSAs) 105 and 106. Asked about a recent Southwest shooting, the captain stated that police had detained some juveniles based on information from the community with the cooperation of DC Department of Youth Rehabilitation Services, but that no further progress had been made.

Pulliam stated that there had been a recent robbery on Fourth and M streets SW. He also said that a pedestrian had been struck by a vehicle that very evening in the right-of-way at the corner of M and Fourth streets but was expected to survive.

Collins commended the First District on its annual holiday party for neighborhood children.

ABC Matters
Dr. Coralee Farley, chair of the commission’s Alcohol and Beverage Committee, expressed her exasperation at the recent, unanimous decision of the Alcohol Beverage Control Board not to sanction the Anthem. She also stated her concerns about the coming Nog Fest at The Wharf. She asked that any consideration of Requin’s (100 District Square SW) request for a 40-seat expansion to its summer garden await clarification about its impact on the adjacent firepit. Litsky agreed, declaring that this Wharf amenity would not be allowed to disappear.

Farley asked that any consideration of a license for Officina, 1120 Maine Ave. SW, be tabled until the applicant provided adequate drawings of its summer gardens. Litsky agreed. Complaining about the document’s handwritten notes, he stated that “it resembled the Republican tax bill.” “We need proper drawings of the lower level,” he added, to access its impact on the flow of pedestrian circulation near the Fish Market.

Other Matters
Fast stated that the issue of pedestrian safety at the intersections at Seventh and Ninth streets and Maine Avenue SW adjacent to the Wharf had been brought to her attention by multiple constituents, one of whom had drafted a resolution. Fast stated that she planned to raise the issue at the next meeting of the Transportation Strike Force. She may also offer a resolution in February addressing signage, traffic-light timing, right-turn prohibitions and road striping. Litsky agreed with her decision to give the matter more thought.

Dr. Jennifer Smith, director of the DC Department of Forensic Services and a Southwest resident, briefed the commission on the work of the Consolidated Forensic Lab at 401 Fourth St. SW. The facility houses the city’s crime-scene investigators, the public health lab and the forensic science lab. It is an independent agency answerable to a stakeholder council.

Smith reported that the lab’s DNA department was back online and that it had cleared any backlogs in testing sexual assault kits. In response to a commissioner’s question, she stated that the facility houses the city’s mosquito laboratory. While Zika does not have a presence in the District, Smith stated, West Nile is here.

DC Reinvest, a coalition of DC-based grassroots groups, asked the commission to endorse its campaign against Wells Fargo. Citing the bank’s poor record as a community lender, the organization is asking the District to transfer its accounts to other financial institutions.

The commission voted with a majority of five to endorse a resolution offered by ANC 4C in support of the Leaf Blower Amendment Act of 2017. The bill encourages a transition from gasoline- to battery-powered leaf blowers. Collins abstained on the vote.

After first rescinding a September vote, the commission voted to oppose the design for 1900 Half St. SW on Buzzard Point. The vote was five in favor with Fascett abstaining. The project was the subject of extensive discussions during the November meeting.

The commission agreed to send a letter supporting the DC Public Library’s request for a parking variance for the new Southwest Library. Three commissioners voted in favor with Fascett and Hamilton abstaining.

The commission decided not to vote on a sidewalk cafe public-space application for Shake Shack, 900 Maine Ave. SW.

The commission voted with an abstention by Collins to request a traffic control plan for the construction project at 1000 First St. SE, which is adjacent to Eagle Academy Public Charter School. The issue is truck traffic through the alley that abuts the school.

The chair reported that the planned unit development for the second phase of The Wharf had been approved by the Zoning Commission after three separate votes. Water Building Three has been removed from the development, he said.

The issue of banning tour buses from the new Waterfront Park has been resolved by a combination of legislation authored by Ward 6 Councilmember Charles Allen (D) and a promise by the developer to incorporate the ban into the covenant transferring the park to the city. He also reported that slip holders at the Gangplank Marina had reached a tentative agreement with The Wharf.

There was no treasurer’s report.

Correction
It was incorrectly reported in the November Hill Rag that the commission took “no action” on a Class B license for Officina, 1120 Maine Ave. SW. In fact, the commission tabled the matter due to concerns about the impact of the establishment’s summer gardens on pedestrian circulation. 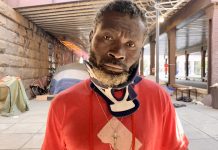 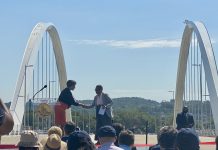