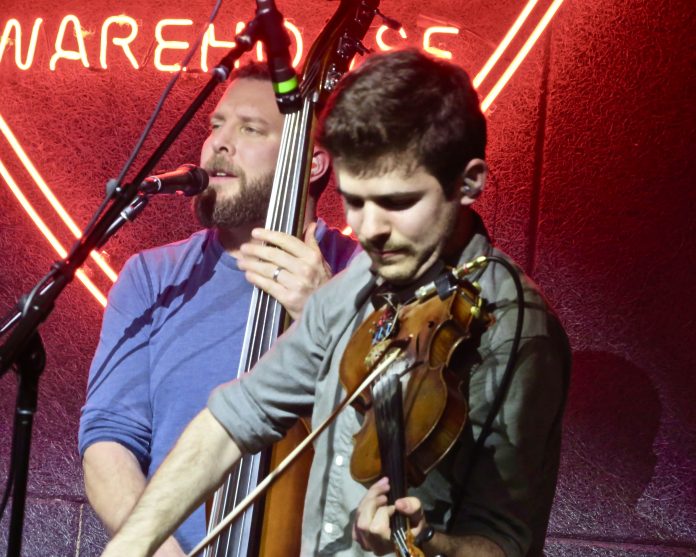 Who had a better time ringing in 2018 at The Wharf’s intimate Americana music venue, Pearl Street Warehouse, on Sunday night? Love Canon, the bluegrass eighties cover band electrifying the stage for over three hours or the delighted party-happy crowd, filling every inch of available space on the dance floor? The answer is not a clear one, which is to say band and audience united to enjoy each original eighties rendition the Charlottesville natives chose to pluck, strum, and sing into the new year. The result was simply one of the most fun and energetic parties I have had the pleasure to attend! 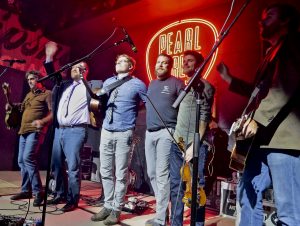 Touring the mid-Atlantic since 2010, Love Canon has enjoyed this decade’s resurgence in the popularity of bluegrass music. The band’s offering of virtuoso-level strings’ talent combined with fresh and entertaining renditions of classic eighties tracks, such as Paul Simon’s Graceland and Journey’s Don’t Stop Believing, have them tapping into their loyal fans’ appreciation of true musical talent and penchant for nostalgia. Indeed, I was delighted to talk to some of the revelers who had traveled from as far away as North Carolina to enjoy their first embrace of 2018 with these raucous crowd-pleasing musicians. An additional testament to Love Canon’s popularity was evident while watching even the younger fans, some of whom who were born in the eighties, sing along and groove to a bluegrass inspired Centerfold, The J. Geils Band’s MTV fixture from 1981. 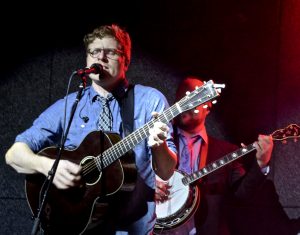 Lead singer and guitarist, Jesse Harper, with his boyish good looks and lapsed prep school student sense of style, augmented the bands’ performance with an appealing sense of mischief. For example, a bluegrass-tinged selection from Mozart’s Symphony No. 40 was deftly and delightedly inserted between Don Henley and Peter Gabriel classics. 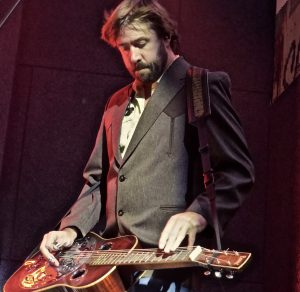 Harper owned the stage with an obvious confidence and shared his enthusiasm throughout the show, approaching each fellow musician in turn, to highlight the individual artist’s gifts. Adam Larrabee – Banjo, Andy Thacker –Mandolin, Darrell Muller – Bass and Jay Starling –Dobro, who literally mesmerized me with his focus and skill—propelled Pearl Street Warehouse’s Americana-loving New Year’s Eve audience into 2018 with an infectious exuberance that left the crowd chanting “five more songs” after a champagne toast at midnight and beyond.