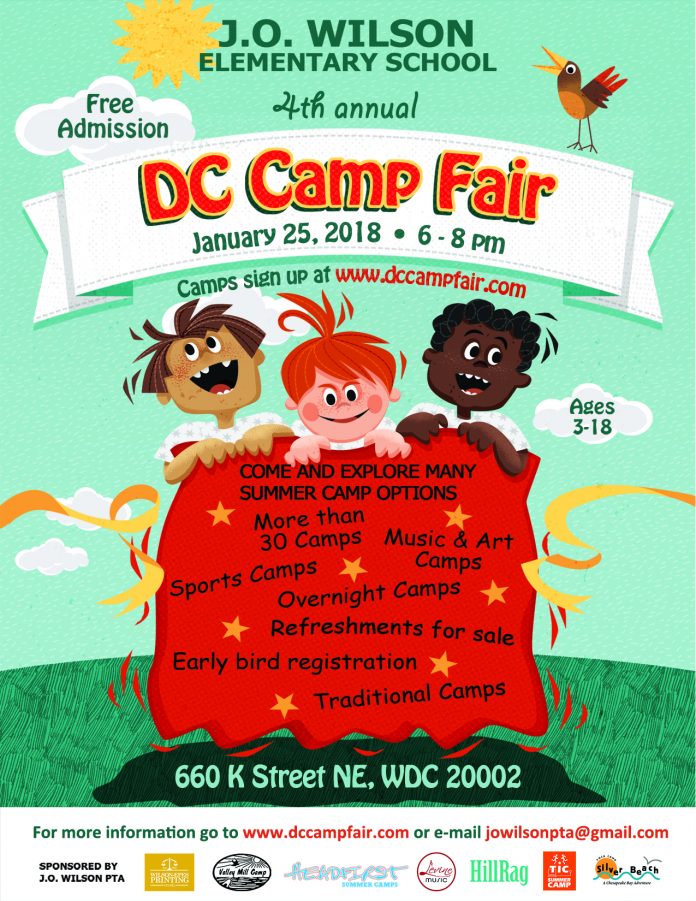 Fortunately, the good folks of the J.O. Wilson Parent Teacher Association (PTA) have made it a little easier on you. On January 25th, they will host the Fourth Annual DC Camp Fair. The event offers one-stop shopping for possible camp experiences, as well as a chance to meet camp representatives and ask questions. It is the only event of its kind in the District.

Larry Gill conceived the J.O. Wilson Elementary School Fourth Annual DC Summer Camps Fair three years ago. The camp started as an information session, but has evolved into something much bigger. More than 300 parents attended last year. “We were trying to answer demand to expose parents to quality camps that they didn’t know were available locally,” Gill said. “We had about 40 camps attend last year.” That list includes the Smithsonian Summer Camps; Camp Rim Rock, a girls’ camp located two hours outside of DC in West Virginia; Headfirst Camps, and Valley Mill Camp, a day summer camp in Maryland, among others.

Gill says the camps represented come from all over the District, Maryland and Virginia from both day camps and overnight camps with specialties from art and cooking to boating and sports. “We try to get a variety representing different cost categories – last year, there were some that were free — and options from cooking to specialty sports and sailing,” he said.

Carolyn Bowen has two children. Last year, when they were aged 3 and 5, they both attended camp. She has visited the fair herself. “It’s nice for someone else to do all that work, and put it in one place,” she said. “Especially since the fair makes it very clear which age is accommodated. Some don’t start taking kids till they are six [years old].”

Gill says the fair showcases a lot of options for younger children, “since a new parent might not know what options are out there.”

Gill said he sent his daughter to a sailing day camp a few years ago. She could swim, but she had never sailed and had some anticipation before going. Now ten years old, he said she went on to an overnight sailing camp. “It was a one-week exposure that showed her she could do it,” he said.

“You’re going to want to start planning early if you want one of those specialty camps. It seems crazy but do it,” Bowen said. “But also, don’t panic. There are some that have a lot more flexibility and can add sessions if there is interest.”