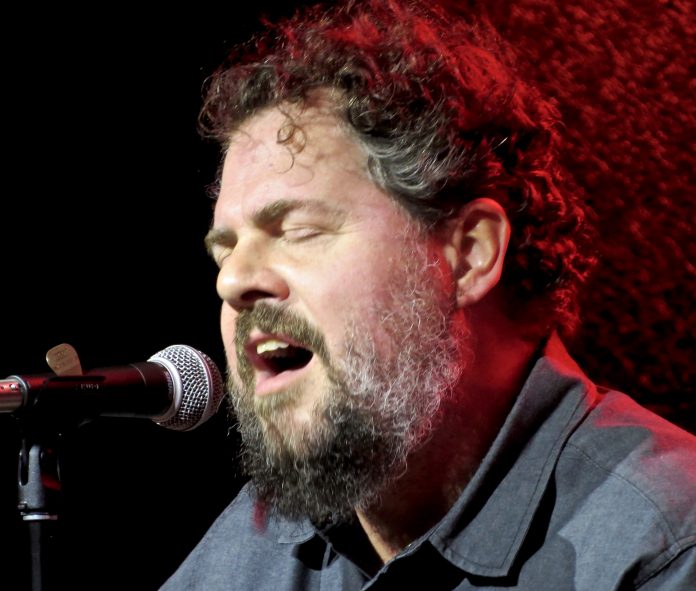 How often do the very qualities of a musician as persona reveal themselves as the actual qualities of the musician as man? My guess would be not very, but that is exactly what Patterson Hood brought to the intimate stage of The Pearl Street Warehouse at his second of two sold out performances on Dec. 3.

Front-man and co-founder of the hugely successful, alternative country-rock band, the Drive-By Truckers, Patterson Hood’s personable understated presence in front of his long-time fans is as genuine, authentic, and human as the lyrics he writes and the stories he tells.

Hood began Sunday’s show with “Sea Island Lonely,” a new song that is as lovely as it is filled with longing for unqualified love and the permanence of home.

But I’ll catch myself a different bus
look up at the bright lights
And revel under the darkness of my songs.
Singing sea island lonely
It’s a wonder that it’s only
Written in the wind that carries me

Hood shares from center stage. He sits on a chair, holding his guitar behind a single microphone. Pearl Street Warehouse provided the perfect backdrop for such an intense solo performance with the packed house seated right up to Hood’s feet.

Hood’s second song of the evening, “Grand Canyon,” was written in 2013 for a good friend who passed away unexpectedly. The darkness is there, but Hood also revels in the light. This duality occupies many of his songs, which narrate the resilience of beauty in the face of life’s unbearable pain and loss:

Lately, though, the songs Hood writes are more overtly political, an unavoidable byproduct of this peculiar and unsettling social and political moment.  While Hood’s personal has always been the political, early expressions were reflected in the stories he told of the forgotten and the forlorn. American Band’s 2016 release signaled a change in focus, and Sunday night’s audience heard an unbridled disgust in “The Perilous Night,” a new song decrying a time when American values are belied by current events:

Dumb, white and angry with their cup half-filled
Running over people down in Charlottesville
White House Fury, it’s the killing side he defends

The second encore and final song of the evening came full circle, hearkening back to the Drive-By Truckers as they “hit the road” for the very first time. Hood delivered the band’s standard, “White Knuckle West Virginia,” with the endearing humor and grace as real as the lives of those about whom he sings.

Patterson Hood’s solo performances are known for their quieter ambiance, the rowdiness of a typical Drive-By Truckers show tempered through a lone voice. But, while more introspective, his energetic rendering of every-soul’s restless spirit takes Hood’s listeners on a road-trip as rich and as purposeful as the Southern soil he once called home.

Hood’s performance was simply “magical” as any show that this reviewer has had the pleasure to experience.