Justin Trawick has worked as a musician for a decade, and one song on his new CD is titled “Ten Long Years.” It’s not all about his career, but these words could apply: “There comes a time when you’ve gotta move on, the chapter’s over and the train is long gone, I wanta write a new story now.”

While Trawick has become a familiar face on stages around the DC region, the six songs on his new EP “The Riverwash” represent a new direction. His previous records were with solo projects or with a full electric band; his new group, The Common Good, features acoustic guitar, bass, mandolin and fiddle. Trawick will preview the new EP at Mr. Henry’s on Dec. 28, with an official release show in January at Pearl Street Warehouse.

As Trawick’s sound has evolved, he has kept his focus on the songs. From the time he started playing saxophone in sixth grade, “I was never very interested in practicing the notes on the page. I was making up stuff in my head.” When he picked up his dad’s guitar at age 13, he started writing songs.

Trawick also started a collective of songwriters, We Are the 9, that will perform at the Kennedy Center’s Millennium Stage on Dec. 21. The lineup of the group changes but always includes nine writers who perform their own material.

As a writer, Trawick isn’t stingy with his lyrics. “I’ve always been wordy, for better or worse” he said. His stories are plainspoken tales of love and life. “All the Places I’ve Been,” inspired by his grandmother, is a chronicle of the life of our nation in the 20th century. A live recording of the song was released a few years ago, but Trawick is excited about the new studio version. “This is the first record I’ve put out that really sounds like what I sound like live,” he said. “I’m excited to have a product that really represents me.”

Just don’t expect his live performances to match the record exactly. Trawick played in jazz groups in college and still loves to improvise. “We make up songs at shows basically on the spot, or play existing songs different,” he said. “I think it’s a fun way of being a musician.”

Patterson Hood didn’t set out to make political statements when he co-founded The Drive By Truckers more than 20 years ago, but he has become increasingly outspoken about the state of our nation. In advance of his solo shows at Pearl Street Warehouse on Dec. 2 and 3, we asked him a few questions.

Q: How are your intentions for your solo work different from what you do with the DBT, or similar?

Hood: You could say they’re the polar opposite ends of what I do music-wise. The solo shows are more intimate, quieter (although probably still a little on the loud end of solo acoustic music). More storytelling and banter. Spookier and swampier.

Q: In your recent article about Tom Petty for The Bitter Southerner (website) you say you hate the term “Southern rock band.” Please explain.

Hood: It’s an archaic and limiting term. It puts us in a box that I don’t want to be stuck inside of. It conjures images of Skynyrd and rebel flags and right-wing politics (which in all fairness wasn’t part of the equation during Skynyrd’s heyday and VanZant’s and Duane’s lives). I’m certainly proud of the Southern roots in our music, but most of the music I’ve loved came from Southern bands that were never considered part of that scene (Tom Petty, R.E.M., Wilson Pickett, Otis Redding, Carl Perkins, Doug Sahm).

Q: Do you think you can influence the attitudes of people who like your music, as far as their views on race or other subjects?

Hood: I have no idea. Probably not, but I don’t know. That’s not in any way part of the picture for me. I write what I feel. I always hope that people respond positively to that but it’s really out of my control. All I can do is write what I feel and perform it to the best of my abilities.

Q: Will you have other any musicians playing with you at Pearl Street?

Hood: No. All by my lonesome. 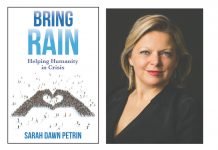