Down at The Wharf this past weekend, The Pearl Street Warehouse hosted two distinctly different sounds. On Friday night, the venue rocked to the blazing guitar of Jimmy Thackery. The next evening, the old time singing of Dom Flemons graced the stage. Both nights, talented DC-based musicians, Fast Eddie and the Slowpokes and Bellwether Bayou opened for the main acts.

The venue, located on Pearl Street down at The Wharf, is intimate, holding no more 300. With corrugated steel walls, it feels like a bar straight out of NOLA. The stage is fronted by a set of communal tables. Behind are a set of high tops. A second floor balcony contains more seating. In addition, one can stand near the bar.  Table service is available. Don’t miss the tatter tots.

Jimmy Thackery is a talented blues and rock guitarist with a 45-year history. He is a true road warrior, performing roughly 300 shows a year. Best known as the co-founder of the Nighthawks, Thackery now plays as part of a hardcore guitar oriented rock ‘n’ roll trio.

On Friday, Thackery wowed the audience with his command over the guitar. Making the instrument alternately sing, wail and sigh, his lightning fast style embraced reverb and intricate picking.

Taking a page from Jimmy Hendrix’s, he performed the “Star Spangled Banner.”

A personal favorite, Thackery’s ode to breakups, “Sell The Bitch’s Car,” brought down the house.

One of things that this reviewer most appreciates about Pearl Street is the venue’s commitment to DC musicians. Lisa White, whose pedigree includes the well-known 9:30 Club and Gypsy Sally’s, is responsible for booking the club’s acts.

White’s exquisite taste and the breath of her local Rolodex were on display Saturday night as a young woman, Bellwether Bayou, a.k.a. Laura Schwartz walked on to the stage armed only with a fiddle. Audiences may have glimpsed Schwartz at a recent tribute to Peter Seeger at the Kennedy Center.

If not, watching Schwartz fashion an entire band out of a looped fiddle was likely a revelation. Possessed of a soulful, clarion voice, she delivered striking performances of her own songs of which “I’ll Draw The Map” was a standout; as well as folk standards.

Schwartz’s performance, warmed the audience up for the evening’s main act, The Dom Flemons Duo.

Most readers will remember Flemons as one of the founders of the Carolina Chocolate Drops. A ethno-musicologist, known as “The American Songster,” he is an expert on old time African American song traditions and has played a major part in the revival of the banjo. Flemons performs on everything from the rhythm bones to the acoustic steel guitar.

Joined by talented young bassist and fiddler Brian Farrow, Flemons waltzed the audience through a host of genres that ranged from the blues of the North Carolina Piedmont to early country sounds of Hokum.

“Hot Chicken,” Flemons own composition, an ode to an East Nashville joint, delighted the audience.

“Too Long,” another Flemons tune, narrates life on the road. His graceful tenor gave this poignant ballad an especially beautiful rendering given his wife’s presence in the audience.

Given the breadth of this past weekend’s offerings, DC audiences can look forward to many more memorable shows at The Pearl Street Warehouse. Don’t miss Patterson Hood of the Drive-By-Truckers as he makes a solo stand on Dec. 2 and 3. 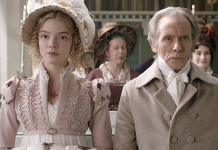 “Evenings at the Edge” at the National Gallery of Art