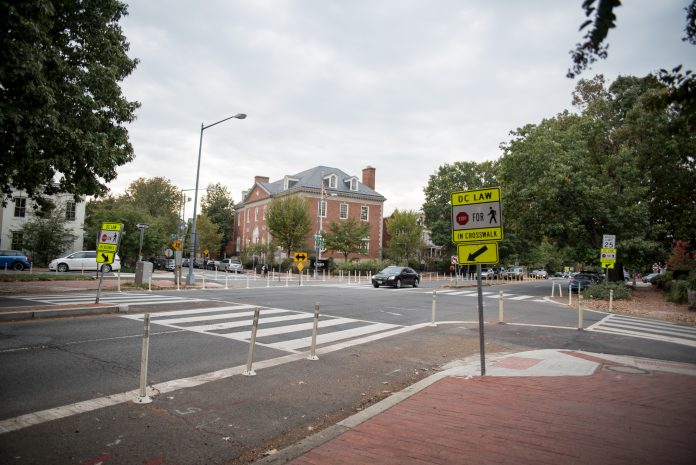 A frustrating reality of modern Washington is that walking is often dangerous. That’s right, simply walking around your neighborhood, to the store, to work – anyplace – is oftentimes fraught with unnecessary peril and brinksmanship that drives conflict and bad feelings. The problem lies not just with the large numbers of drivers and bicyclists, but with the utter lack of enforcement of traffic and pedestrian safety laws by our police.

Consider Maryland Avenue NE. This grand boulevard, with two lanes of traffic on each side, is the wild west of rush hour commuting. Cars routinely travel at speeds greater than 45 miles per hour, blast through red lights and stop signs, ignore cross walks and put pedestrians in harms’ way. They do this, at least in part, because they know they have a 0.0 percent chance of being penalized. The city’s response: a lone traffic camera at Seventh and Maryland NE, which slows down traffic momentarily. Some local residents are supporting a plan to eliminate a lane of traffic on each side of Maryland Avenue, but a better idea would be to ensure that the police are consistently present during the rush hours, pulling drivers over for speeding and other offenses. Drivers would take notice, and change would come quickly.

Bicyclists are also undermining pedestrian safety. The rise of bike-sharing and bicycle lanes, funded by the city, have driven what seems like an exponential increase in the number of bicyclists. They are everywhere: in the roads, on the sidewalks, in parks, in crowds, anyplace they feel like going. They blow through red lights, through stop signs, through crowded cross walks; there is no law or common practice they don’t feel entitled to violate. Last year, an elderly woman was killed by a bicyclist speeding down Connecticut Avenue. He received a ticket.

Last Thursday, my wife and children were nearly hit by a driver while using a cross-walk on E Street NE. Words were exchanged. The driver sped off. The worst part? Four police officers witnessed this, but did nothing. When my wife complained, they blew her off. This did not surprise me. In the 17 years I’ve lived in Washington, I can’t remember ever seeing or even hearing about a police officer pulling a car over for speeding in residential neighborhood. I’ve seen cars speed past police cars, blow through red lights in front of the police; I’ve witnessed drivers nearly hit pedestrians, while police looked on and did nothing. Why bother having traffic safety laws if we’re not going to enforce them?

I recognize that pedestrians do dumb things every day (Can we outlaw walking while looking at phones?), and that they need to follow the rules, too. I also recognize that there are many safe drivers and responsible bicyclists. However, our transportation system is supposed to be set up to prioritize pedestrians and protect them from the kinetic energy of a 2,000 pound car, or an adult riding a steel framed bike for that matter. Pedestrians take precedence.

Washington markets itself as a highly “livable” city due to its walkable neighbors and transit options. There’s obviously a lot of truth to this. The unfortunate reality, however, is that we are headed in the wrong direction. There are too many “near misses” happening every day, too many angry encounters, and too many genuinely dangerous situations. Just writing this piece has elevated my blood pressure.

It’s not hard to figure out what needs to be done. Greater police presence and enforcement during rush hours at major intersections and neighborhood bottlenecks; providing pedestrians with a few seconds head start when the light turns green; how about more crossing guards near schools for the kids?

Pedestrian safety won’t be ameliorated until our elected officials and police start taking the minor steps necessary to prioritize safety. As far as I can tell, Ward 6 Councilmember Charles Allen (D) has not done anything to address the unsafe environment for pedestrians, nor has Mayor Muriel Bowser (D) shown any interest. I hope they turn their focus to this problem, as it’s a major factor in our quality of life. I don’t demand perfection, but I do expect improvement.

James A. Hunter is a resident of Capitol Hill. He can be reached at jamesahunter@gmail.com.

Councilmember Evans and the Mail Carrier