After more than ten years of effort and forty-two months of construction, The Wharf officially opened Thursday October 12th. Those assembled were showered with confetti following the entry of the Eastern High School Band and the singing of the National Anthem by the Show Choir from the Duke Ellington School for the Performing Arts.

After remarks from Mayor Muriel Bowser, Congressperson Eleanor Holmes Norton and Councilmember Charles Allen (Ward 6-D), developers Monty Hoffman (PN Hoffman) and Amer Hammour (Madison Marquette) concluded their remarks by smashing bottles of champagne together with other dignitaries, the signal for a display of daytime fire works on the water.

Entertainment continued throughout the day, with a free concert at District Pier by the Bacon Brothers, a country-soul-rock band fronted by actor and vocalist Kevin Bacon and his brother Michael, and with the sold-out opening concert by the Foo Fighters at The Wharf’s new concert venue, the Anthem.

Monty Hoffman, Managing Director of the Wharf project and CEO of PN Hoffman, had many people to thank, including his business partners, city officials, the Congresswoman and the helicopter pilots keeping the crowd safe as well as the person with whom he had what he said was his most successful partnership, Traci Hoffman, his wife of more than twenty-five years.

Delegate Norton, who introduced two bills related to the Wharf project to Congress, praised the work of PN Hoffman and their partners. She said that her great-grandfather Richard Holmes arrived at the Wharf after walking off a slave plantation in 1850.

“I appreciate that Monty Hoffman has not only preserved the original name of this historic site,” she said, “but he has also preserved one of the Districts oldest neighborhoods, Southwest Washington.”

Norton added that with the opening of The Wharf, “DC is becoming a true waterfront community.”

Councilmember Allen agreed, adding that the development would again knit the city to the water. He said that he appreciated that the developers realized “that for this to be successful, it has to be a strong part of the community,” recognizing Advisory Neighborhood Commission (ANC) 6D Chair Andy Litsky as well as the Southwest Neighborhood Assembly and others “that have worked so hard to make it so that this development, the businesses, the jobs that are created, the new housing really fit into the fabric and the neighborhood that is our Southwest DC.”

“This is an incredibly special place,” he said, “and The Wharf opening today is something that makes it even greater, and I’m so excited to be a part of it.”

Mayor Bowser praised the work of DC Council, Congresswoman Norton and the developers. She noted that almost one in four of the housing units were at below market or affordable rates, and there are more to come. She also noted that 6,000 permanent jobs were created by Phase One of the development, which also created 1150 construction jobs, close to 50 percent of which were filled by District residents.

Bowser said, “This is one of the best times in the history of our city. We’ve never been stronger, and now we have the ability to make the types of investments to make sure all DC residents are participating in that progress. The Wharf is an exemplary example of how government and private sector can work together to enhance a neighborhood.”

Bowser noted that years earlier when she approached Hoffman to inquire about the Wharf project as Ward 4 Councilmember, he asked her “what are you doing here? You literally live the farthest away from the site of any councilmember.” She said that all of DC had an interest in the success of the project.

“This is our Waterfront, our destination, and we couldn’t be more proud.”

The $2.5 billion renovation to Southwest’s waterfront neighborhood required several acts of Congress and legislation by the DC Council as well as $80 million of public funds. The 3.2 million square foot site has access to six metro lines and VRE, 1,750 bike parking spaces, a half-mile of dedicated bike path and four Capital Bikeshare stations. There are ten acres of parks, open spaces and civic areas. The site is home for habitants of the 1,377 residences, provides 690 rooms in three hotels, and offers 335,000 square foot of restaurant and retail space, including 26 different restaurants and eateries.

“If this is Phase I, people,” Congresswoman Norton said in her remarks, “imagine what this site is going to look like when it’s finished.”

Hoffman said that his team would take the weekend to celebrate the completion of Phase I of the project, but come Monday he expected they would launch directly into work on the 1.2 million square foot section of Phase II.

Celebration of the official opening continues from October 12th through 15th. Events are open to the public. 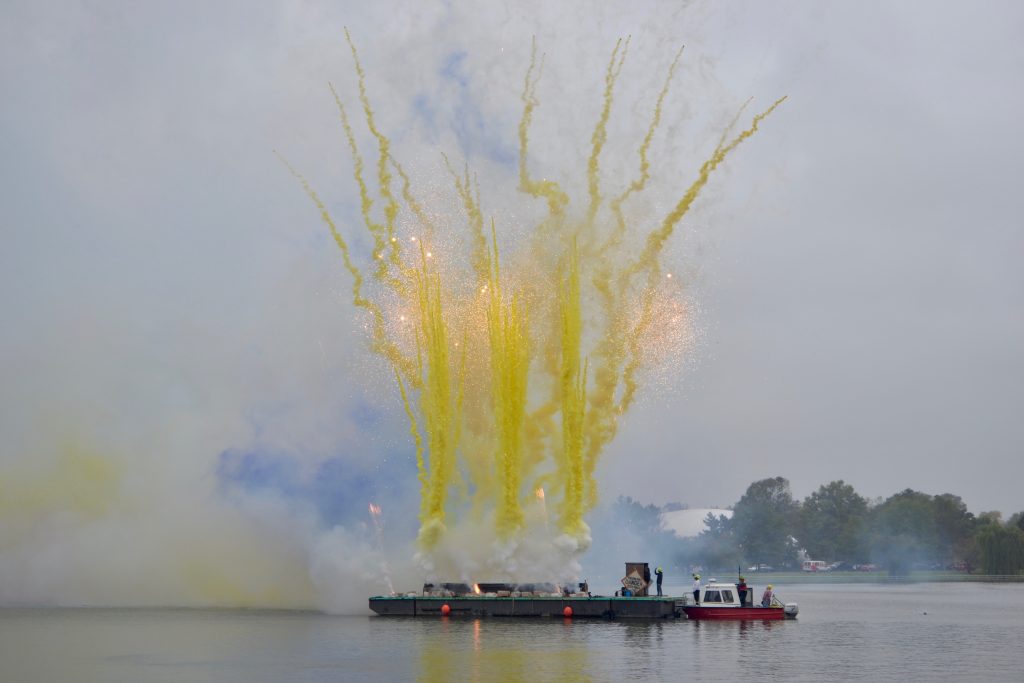 When Congress Moves Into the House Next Door