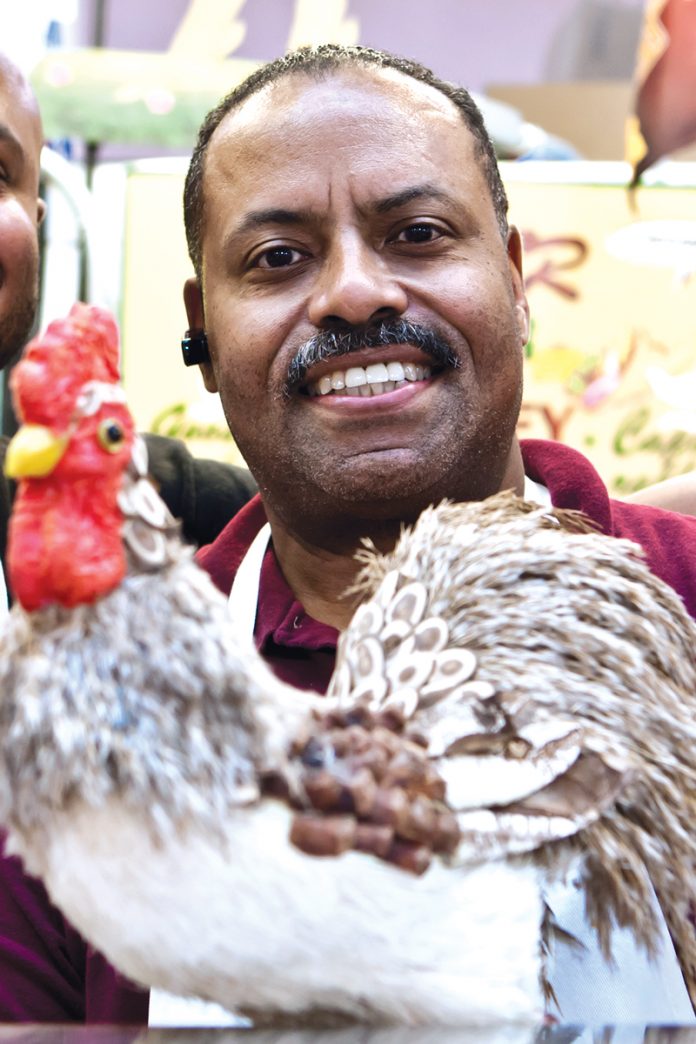 Late one afternoon some 40 years ago, I ran over to Eastern Market from my house on Ninth Street SE to buy something for dinner. When I went to pay for my chicken, though, I realized that the bill I had grabbed on my way out of the house seemed to have vanished. I had no money.

“That’s ok,” said the handsome man behind the counter at Market Poultry. “I know you. Just pay me next time.” I had never before experienced that “small town in the big city” aspect of Capitol Hill. Eastern Market was part of my routine, but it hadn’t occurred to me that I had friends there.

The next day, I was back at the market to pay Melvin Inman, and I have been buying chicken, duck, rock Cornish hens, turkey, and eggs from him ever since. He and I have discussed the best way to fry chicken (in peanut oil, of course), the possibility of deep frying a whole turkey (yes, it sounds weird but it can be done and is delicious), the pros and cons of organic chicken (pro – it tastes good, con – it’s expensive), and other topics from the fire at the Market in 2007 to family and faith and football. (As anyone knows, Inman is a BIG Redskins fan. Me, not so much.)

Like many, many other customers, I was astounded and saddened to learn that this year I will not pick up my holiday turkey from Inman. He is retiring. Market Poultry will continue under new management. Susan Mendoza, who has worked for Jose Canales at the market for over 20 years, has been shadowing Inman for several months and will take over. “She’ll do well,” Inman said. “She comes with a lot of zeal and the excitement that a sole proprietor can bring.”

When I said to Inman that I figured he must have mixed feelings about retiring, he corrected me. “No, no mixed feelings,” he said. “I love all of you all, my customers, but it is time for a change.”

He said he is looking forward to directing his energy to things besides work. And then he turned philosophical. “I have a wife to love,” he said, “a life to live, and a God to serve.” Part of his plan for the future is mission work with the Fort Foote Baptist Church, where he is a deacon and his wife Beverly is head deaconess. And he wants to spend more time with his five grandchildren, not missing their soccer and basketball games but being there for them.

There are things, he said, that feed your soul, but you can’t do them when you work at least 10 hours a day, six days a week as he has for years.

Inman grew up in Northeast DC. His dad was an accomplished brick mason who told him, “Son, you don’t want to do this kind of work. Do something else.” His mother was a currency examiner at the Bureau of Printing and Engraving.

“I am a Rambler through and through,” Inman said, remembering his days at Eastern High School, where he played in the drum and bugle corps and was part of the marching band. He did two years at Washington Technical Institute and then a couple more at the University of Maryland with the idea, somewhat inspired by his father, of becoming an architect. But one of his professors discouraged him, saying he would spend the first 10 or so years designing “latrines and closets.”

Inman wanted more and wanted it faster, and in his heart he knew an office job was not for him. He also knew that he had a gift for sales – he had been a successful Fuller Brush man despite the big Afro, the beard, and the bell-bottom pants which a friend told him would scare his customers.

He “put the charm on” and did stints selling wigs and refrigerators. When his high school friend Elleman Queen asked him to come help out with his poultry stall at Eastern Market, Inman gave it a try. It worked. In the mid-70s, when Queen wanted out, Inman took over. He has been there ever since.

At one point his mother, a longtime government worker, said to him, “Mel, you need to think about getting a real job.” But he had found his niche and was happy, working with longtime friends and neighbors and meeting new people all the time. His mother eventually brought her church family to visit the market and proudly told her friends, “This is my son.”

Market Poultry was always a family affair, with Inman’s sons, Mel Jr. and Juan, helping out from the time they were little boys, and his wife Beverly pitching in too. Mel Jr. and Juan have now moved on to other endeavors. “My dreams are not their dreams,” explained Inman, again waxing philosophical. “When you are a child in a family business,” he said, “you have no choice. Now they have gone in their own directions.” His sons are doing well, Inman said, and are enjoying having family time especially at holidays.

“I’ve had a good run,” said Inman as he packed up some of his equipment.

I feel the same way. Inman sold me the first chicken I ever fried, the first duck I ever attempted, and the turkey I cooked for Thanksgiving the year I got married.

I will think of him this year in November as I wait in line at Market Poultry and I will enjoy imagining him having a real holiday. Thank you, Mel. We have had a good run.

A Decade of Progress. A Future of Growth