Every September we Washingtonians are spoiled by theater, as dozens of local companies roll out award-winning plays with stellar directors at the helm. Yet amid this embarrassment of riches, uncertainty plagues me until the casts are announced. Unlike Shakespeare, I can’t be sure the play’s the thing. For me, it’s the actors.

Sadly, I’m not familiar with every actor who takes the stage, but I’ve seen enough of them to feel I know a few. I’ve even startled several when I spotted them around town, expressing my admiration and asking what they were up to next. I trust them to seek out promising projects and great directors, and even when they make a poor choice, I know they’ll bring something special to their roles.

Washington’s theaters have announced the casts for only a fraction of the season’s plays, but among this selection some of my favorite actors bring a flutter of excitement. So far, these are the performances I look forward to this fall.

Death of a Salesman, Ford’s Theatre, through Oct. 22
Craig Wallace assumes the role of Willy Loman in this Arthur Miller classic, once more taking on the challenge of nontraditional casting that’s been a hallmark of his work since his first appearance with the Shakespeare Theatre Company 30 years ago. From his early roles as silent shepherds and soldiers, Wallace advanced to supporting roles on stages across the city until finally landing a wide array of leading roles — from Othello at the Folger Theatre to Scrooge at Ford’s. He’s played leaders, losers, and everymen, black and white, of every background, with aplomb, lending a resounding voice and deep humanity that few actors can match. 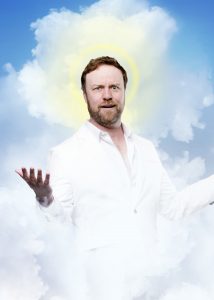 Theatre J, Sotto Voce, Oct. 3–29
This story of a young Cuban man’s research into the fate of the S.S. St. Louis at the hands of the Nazis leads him to a reclusive writer, portrayed by Washington theater veteran Brigid Cleary. I vividly remember her riveting performance in a 2004 production of Homebody/Kabul by Theatre J and Woolly Mammoth Theatre Company. Playwright Tony Kushner opened the play with a widely criticized monologue, lasting nearly one hour, on 3,000 years of Afghan history. But Cleary’s rendition left me breathless. If she can handle that, she can do anything.

An Act of God, Signature Theatre, Oct. 3–Nov. 26
Tom Story excels in challenging serious roles. In Mosaic Theater Company’s Blood Knot, he was outstanding as Morris, the conflicted son of a black woman who has been passing for white in South Africa, and he appeared as Prior Walter, abandoned and alone and suffering from AIDS, in Round House’s Angels in America. But Story is also a hoot. I can’t wait to see him play God in this play with a script by David Javerbaum, who won 13 Emmy Awards writing for The Daily Show.

The show also features the delightful Jamie Smithson as the angel Gabriel. Smithson was the best thing about Signature Theatre’s production of Cake Off, delivering hilarious portrayals of a wickedly sinister emcee, a devil-may-care veteran contestant, and a legendary stop-at-nothing champion of a cutthroat baking competition.

Folger Theatre, Antony and Cleopatra, Oct. 10–Nov. 19
Cody Nickell has been a stalwart performer at the Folger Theatre for years, with a flair for wit and romance that earned Helen Hayes Award nominations for leading roles in The Taming of the Shrew and Arcadia. And as the Earl of Leicester in the Folger’s production of Mary Stuart, he effortlessly weaved through episodes of conspiracy, seduction, despair, and remorse, more than holding his own in wooing the formidable Holly Twyford as Queen Elizabeth and Kate Eastwood Norris as Queen Mary. Nickell has all the makings of a stirring Mark Antony opposite acclaimed New York actress Shirine Babb, and the production in the round promises extra intensity and intimacy.

Peter Pan, Synetic Theater, Oct. 18–Nov. 19
Anyone who saw Alex Mills’ adorable Puck in the Synetic production of A Midsummer Night’s Dream, followed soon after by his terrifying performance in Jekyll and Hyde, has witnessed his spellbinding blend of physical movement and passionate expression. He’s perfectly cast as Peter Pan, bringing a boyish appeal with dark undercurrents. Ryan Sellers, another Synetic veteran, is the picture of Captain Hook. Sellers’ stern demeanor, which played to great effect in Signature’s West Side Story, is softened by the good humor showcased last year in the Folger Theater’s Second Shepherd’s Play and many children’s productions at Imagination Stage. What a fine duet.

Arena Stage, Pajama Game, Oct. 27–Dec. 24
For this classic musical, Broadway actress Nancy Anderson returns to D.C., where I last saw her musical talents in the Shakespeare Theatre Company’s A Midsummer Night’s Dream in 2012 and Side By Side By Sondheim at Signature Theatre six years ago. She’s joined by the incomparable Edward Gero, who’s been busy portraying Antonin Scalia in the Originalist at Arena Stage and around the country. He’s always been outstanding, whether playing Mark Rothko in Red, Richard Nixon in Nixon’s Nixon, or Scrooge in A Christmas Carol, as well as in scores of Shakespeare Theatre Company productions.

I’m also eager to see Britney Coleman, who makes her Arena Stage debut as Babe. I had never heard of her until I witnessed her dazzling rendition of “I’m Not at All in Love” at Arena’s season preview event. Now I know she’s a big reason to see the show.

Round House Theatre, The Book of Will, Nov. 29–Dec. 24
This comedy about two actors determined to compile the lost works of their friend William Shakespeare would easily grab my attention. But the photo of Todd Scofield on the Round House webpage for the show (appearing even before casting was announced) had me sold. I always enjoy watching this multifaceted actor, who has become practically ubiquitous in Washington. He’s turned up as the frustrated, sputtering Gooper in Round House’s Cat on a Hot Tin Roof; as the gentle father of Pearl in Imagination Stage’s The Little Mermaid; and in countless supporting roles at the Folger and Shakespeare theaters. And as C.S. Lewis in Freud’s Last Session at Theatre J, Scofield provided the perfect balance of optimistic strength and assuredness opposite Rick Foucheux’s abrasive, depressed Sigmund Freud.

Mosaic Theater Company, Queens Girl in Africa, Jan. 4–Feb. 4
Mosaic’s Queens Girl in Africa features the quietly powerful Erika Rose as Jacqueline Marie Butler, who sails to Nigeria after the assassination of her father’s close friend Malcolm X. A Woolly Mammoth company member, Rose stood out among the massive cast of Mosaic’s Unexplored Interior as an American struggling to unravel the Rwandan genocide, and she won a Helen Hayes Award for her mesmerizing portrayal of Hawa, a brutalized Muslim woman who has lost her entire family, in Theater J’s production of In Darfur. Yet she was equally at home as Curtis, a servant baffled by the behavior of Kate and Petruchio in Shakespeare Theatre Company’s Taming of the Shrew.

Who do YOU love? Be on the lookout. Chances are, they’ll turn up on a Washington stage soon.