Three-foot-tall concrete urns – 17 of them – sat in Lincoln Park empty for decades. I saw them daily when I moved to Capitol Hill NE a few years ago and walked my dog in the park. Being curious by nature, I wondered why nothing was in them, like plants, for instance. Having moved from Charlotte, N.C., I was accustomed to boulevards lined with blooming crepe myrtle trees and hanging baskets of bougainvillea all over town.

Lincoln Park had some rose bushes and grassy areas but no flowers. Being an avid and active gardener and member of two community gardens, I thought the urns should be planted. What would it take to get it done?

Research regarding Lincoln Park led me to the National Park Service (NPS). I learned that the seven-acre park is the largest one in Capitol Hill and is located one mile east of the Capitol building. It was designated as Lincoln Park in 1867 by Congress with a large statue to memorialize the assassinated president. At the statue’s unveiling, Frederick Douglass, who lived on the Hill, gave the keynote speech to some 25,000 people, including President Ulysses S. Grant and members of Congress. Another larger than life statue, of DC activist Mary McLeod Bethune, was placed directly across from Lincoln in 1974, and his statue was rotated to face Bethune.

The urns, brought a few decades ago, look antique but they are not. I sent off my first email to the Park Service and asked if I could plant flowers in the urns. That was the inception of my neighborhood beautification project, which I call Adopt an Urn. I met with Ranger Vince from NPS and discussed minor details such as what kind of plants and flowers.

We named our project P.L.A.N.T.S., People Living Actively Near Their Site. NPS drew up a volunteer contract which I signed as head honcho of this project. NPS’s job was to empty the dry soil from the urns and fill them with fresh potting soil. There was no running water in the park, which meant we would have to bring our own, a bit of a hassle but not an obstacle. In the meantime, I asked friends living around the park and they agreed to help buy and plant flowers. I announced my idea on a group email and the rest of the volunteers replied.

A quick request got both Frager’s Hardware and Ginkgo Gardens onboard. They supplied lovely plants such as trailing sweet potato vines, geraniums, dracaena, and coleus. Once the soil was delivered, neighbors went to work. We each selected the urn we wanted to adopt and brought our own plants and plopped them in. The hard part, if at all, is to continue to water the plants a few times weekly.

Many folks who enjoy the park have complimented us on the new “look” the flowers give to the park. A splash of color and a sign of concern and involvement make us prouder of Lincoln Park. It took almost no effort at all because people on the Hill are eager to lend a hand to keep our neighborhood clean, safe, and beautiful. As Sigmund Freud said, “Flowers are restful to look at. They have neither emotions nor conflicts.”

Many thanks to Ranger Vince and our “adoptees,” Claire, Mary, Sarah, Peter, Phil, Rindy, Barb and Allan, Kristen, Jocelyn, Hannah, Jason, Kara, Vince, James, Rosemary, Elizabeth. Say hello if you see us lugging water jugs to the park, dogs and kids in tow.

Karen Cohen lives on the Hill and is an activist, gardener, volunteer, and photojournalist. Contact her at [email protected] 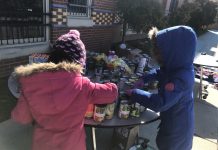