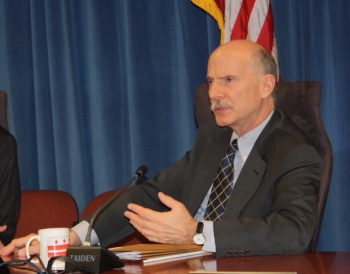 Democracy dies in the darkness, while Metro dies in the shadow of regional parochialism…The opinion response the Washington Post doesn’t want to publish

How could the District be so un-regional that it won’t support a regional tax to fund Metro’s deferred capital needs? [The District’s Death Wish for Metro]

Actually, the District does support a regional tax – estimated to be a 3/4 cent increase in the sales tax that is paid by every resident, business, and visitor in the region. This uniform approach – borne equally by everybody – is shared by other cities.

The need for a new tax comes from years of underfunding Metro. The underfunding underlies the safety and reliability issues that have plagued Metro in recent years.

A regional tax recognizes that Metro is a regional system.

It’s hard to say who benefits more when a resident of, say, Vienna Virginia commutes on Metro into the District for work: the District? Virginia? I say both. And when Metro helps relieve congestion on I-95 in Northern Virginia, I say the region benefits, because congestion makes the region less attractive for residents and businesses to live and do business here.

All of the nation’s largest transit systems rely on a dedicated tax, except ours. Most often, it’s a sales tax, and if not state funded, then typically it is regional and uniform – e.g., New York City and seven counties, or San Francisco and two adjacent counties.

After 40 years, regional leaders have agreed, finally, to support a dedicated tax. But there is not agreement that it should be regional and uniform. Instead, the sentiment seems to be that District residents and businesses should pay roughly three times more than their counterparts in Virginia. (Maryland residents and businesses would only pay double their Virginia counterparts.)

In the spirit of supporting our regional transit system, the District would be made uncompetitive with its regional partners!

Opponents of a regional sales tax point to the fact that Virginia would pay roughly half of the new, dedicated revenue. At first blush, that would seem unfair. But the tax is on the individual, not the jurisdiction, and Northern Virginia has roughly half the region’s population.

Opponents also point to the current funding mechanism for Metro. This uses a complicated formula that includes ridership and station count, but not track miles. It was a political compromise 40 years ago when the region’s sprawl looked very different and the rail system was envisioned to be 98 miles. The District pays 37.2 percent, Maryland pays 34.8 percent, and Northern Virginia jurisdictions pay 28 percent.

No one has explained why this is fair, and, indeed, it was not the approach in 2009 when the District, Maryland, and Virginia agreed to pay one-third each to match new $150 million annual funding from the federal government.

Another issue with using the 40-year old formula for a new, dedicated tax is that as ridership and station counts change, the allocation per jurisdiction will change. Because this is a dedicated tax, each jurisdiction would have to readily vote to change – sometimes raise – tax rates. That outcome can’t be guaranteed, contrary to the purpose of a dedicated tax.

Opponents also point to Richmond: the Northern Virginia jurisdictions cannot impose a new tax without approval by the Commonwealth’s legislature. Not only does Richmond disfavor taxes, but a tax for Metro that comes 50 percent from Virginia taxpayers would be fatal.

I see the argument, it’s a political one, but the response cannot be for District residents and businesses to subsidize the Commonwealth.

Metro must have dedicated tax revenue, and it should be borne equally by all individuals and businesses in the region. A regional ¾ cent sales tax does that, is the same approach used by other big cities, does not alter the competitiveness among our local jurisdictions, and is more dependable than relying on allocations under an old formula.

Phil Mendelson is the chair of the Coucil of the District of Columbia.

Residents Are Not Terrorists!