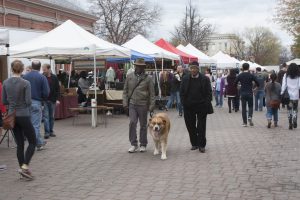 “When the Hine project got started, we (Dept. of General Services) made a decision to move the two flea markets onto 7th Street for the duration of the project. Both Mike and Carol [Michael Berman and Carol Wright, owners of the private flea markets who lease the space from the Eastern Market] have approached us and asked us if they could continue to operate in the 300 block of 7th St. We wanted to reach out to the community before making a decision. That is why we are here this evening.“

DGS is the Market landlord and custodian of the Eastern Market Special Use District and legally controls the public space on lower 7th St.

Roberta Blanchard owner of Fairy Godmother Books and Toys at 319 7th St, SE, which has been directly impacted by the street closure, stated that she wants to see more plans before she can be asked to vote on something, asking “How would it be set up?” She also pointed to the required fire lane and the delivery dock in the middle of 7th St. and asked how “all of this will work” as well as how many vending tents there would be and their proximity to the shops on the west side of 7th St.

Richard Glasgow, in a fervent plea for re-opening the street and to buttress his argument that the fresh food businesses of the South Hall merchants are struggling, cautioned: “We have a saying, ‘Count the bags and not the customers.’” This reporter did that on Saturday, August 19th at 11 a.m. There were 70 customers in the South Hall with five bags and seven people making purchases at counters in what is ordinarily the peak of Market business.

Ward Six Councilmember Charles Allen who supports the continued closing of the street stated: “The real question is how do we make sure the Eastern Market is more widely known. It is a place that you go to spend time while you do your shopping. I am looking for an experience that cannot be replicated anywhere else.“

Manual Cortes, Chair of the newly formed Eastern Market Main Streets (EMMS), referencing the longevity of many of the South Hall merchants, stated that the big question “is not what I did in the 1950s but what are we going to do today?” He added that EMMS supports the closing.

More than one hundred community members and businesses weighed in with remarks at the meetings or by email.

EMCAC plans to issue a report and recommendations to DGS at the end of this outreach process.

Surprisingly there has been little public comment on the issue of parking at the Market. This despite strong statements from the South Hall and other brick and mortar merchants that the lack of parking and access has led to a significant loss of revenue.

The possible return of vehicular traffic and the two dozen parking spaces that could be freed up with the street re-opened has set South Hall merchants against the arts and craft vendors many of whom want the street to remain closed for vending.

The South Hall merchants have not been shy in reminding the community that they were promised that the street closing would end when the Hine project was completed.

The Hine developers promised as part of the community support and approval that it sought that there would be generous and ample parking for the Eastern Market as part of the development package. Stanton East Banc have yet to lay out to the business and residential community how and when the Eastern Market community will share in this promised parking. There are expected to be 320 parking places under the Hine development.

Sources report that Hine move-ins will begin to occur as early as September 30. A Trader Joe’s is scheduled to open in the late autumn.

There are currently thirteen dedicated spaces behind the South Hall buildings which constitutes all the available Market parking.

A survey of more than a half a dozen public markets in other cities might be a guidepost to the way forward as each provides cheap or free and available parking to address their own fiercely competitive environments. This parking is subsidized or paid for directly by these public markets or arrangements have been made with private parking operators.

One thread that runs through a casual survey is that each public market has substantial parking available nearby and all in varying degrees are using a validated parking coupon to lure the potential customers to these public markets.

In one instance the vendors and food operators and farmers pay for all the parking as a business expense. In other instances, these costs are built into the budgets of the public markets and are part of the rent or fees that are charged.

Colonial Parking with its 250 spaces is adjacent to the Eastern Market and currently charges $10 per day on weekends. There is no hourly rate. On a recent Saturday there were more than 150 parking spaces empty and available within a stone’s throw of the Market. According to the parking attendant, construction workers constitute most the lots customers.

Terrorism as a Threat

With more than six major terrorist attacks in Europe in the past year, EMCAC has added to its list of concerns preventative measures at the Eastern Market which lies in the shadow of the US Capitol. As reported earlier, the Market Manager is developing an anti-terrorist plan that remains incomplete.

EMCAC’s Chair Donna Scheeder issued a statement in the wake of attacks in Barcelon : “ Given yesterday’s event in Barcelona, it is imperative that a security review take place immediately of both blocks of 7th St. between North Carolina and Pennsylvania Ave that results in action to eliminate any vulnerabilities to a terrorist auto attack. This is an urgent matter.“