A teen makes a call to police. Her mom’s boyfriend tried to stab her. The one before had tried to choke her. She wants a protection order placed on this one, so she goes down to the courthouse alone, only to find her mom there with the boyfriend. She’d like to leave her mom’s house, but she’s 18 and trying to figure out a plan.

Worse, her story isn’t unusual. Many of her friends have similar stories. One caught her mom’s boyfriend peeking at her in the shower. She couldn’t do anything about it because she’s pregnant and needs a place to stay. But when he tried to rape her a few months later, she escaped to a local domestic violence shelter.

These are the stories Jamila Larson and her staff at the Homeless Children’s Playtime Project hear from the teens, both girls and boys, who come through the program. Abuse and neglect top the reasons why children flee their homes and into often dangerous situations, said Larson, executive director of Playtime Project. “If any teen is getting 80 percent of love from their family, they aren’t running away,” she said. “We need more safe places for teens to talk with someone and help them problem-solve.”

More than a thousand teens run off each year in the District, and that’s only the recorded estimate from those who report to police, according to the missing persons records of the Metropolitan Police Department (MPD).

Fleeing domestic violence situations, homelessness, or inadequate parenting, or seeking the allure of a better life, teens were quietly racking up examples of failures by the city’s community, leadership, and services to stop putting its children at risk. That was, until the MPD’s Chanel Dickerson changed a policy and released live alerts of “critical missing person” reports. The District quickly found itself at the center of a national uproar over what many thought was an epidemic of trafficking in the nation’s capital. Not the case.

But as leaders of the District and service programs responded and Mayor Muriel Bowser launched her task force on the issue, the city realized it needed a more comprehensive, consistent process for reaching out and helping teens facing these situations at home, especially those caused by a disparity of income in the poorer communities.

When Police Get the Call
Children can go missing each day, as observed in DC’s missing persons reports. Sometimes, police officers report that children were left unsupervised and had to fend for themselves. Other times, a child might fall asleep on a bus and wake up in the wrong neighborhood. But a few cases show the larger picture of what officers see when they investigate.

In the case of a 12-year-old male, police have recorded him missing 11 times since the start of 2017. He voluntarily leaves home, and the longest he’s gone missing was three days. Detectives spoke with the boy’s guardian and family members to find out where he hangs out, what may have changed in the time from the last report, and what social media they might use. Detectives spotted the boy on day two of a report, but the boy fled. Finally, the adult that had sheltered and fed the boy saw his picture on a news report and turned him in to police.

In another case, a 16-year-old girl has been reported missing at least eight times since the start of 2017. She voluntarily leaves home, and the longest she went missing was for two days. Detectives again searched all of her regular hangouts and spoke with family and friends. But the girl finally turned herself into her social worker.

The cases often stem from problems in the home. MPD Captain Michelle Caron said that police officers investigate each case each time the child is reported missing. But these children will continue to leave home if they don’t get the services or support they need, from family or otherwise.

Humanizing the Statistics in Reality
DC’s rate of reported critical missing teens hasn’t increased. In fact, the numbers in the last five years have actually decreased, said MPD’s Dickerson, head of the Youth and Family Services division. The average came to about 200 a month in years prior, but 2017 sits at about 190 right now. Investigators closed about 99 percent of all missing person cases (teen and other ages) between 2012 and 2016.

Compared to other cities, DC sits well under the average for cases reported to the National Center for Missing and Exploited Children (NCMEC) of 13-to-17-year-old children between 2012 and 2016: Chicago reported 1,820, Fort Lauderdale 1,768, Miami 1,597, and DC 115. (But not all cities are required to report their missing cases to NCMEC, and social services in Illinois and Florida require it, which can skew the numbers.)

Of the more than 1,000 cases reported so far this year in DC, only 29 remain open (as of April 23), according to MPD’s missing person’s reports. Of the total cases, more than 700, or about 65 percent, are listed as youth cases. Though the numbers seem low, Dickerson remains firm in her stance: “One young person that’s missing is one too many.”

MPD officers who receive 911 reports of missing persons go to the location, determine the child’s age, and send a report to the command center. Police have to search homes for children age 12 and under because sometimes they hide, and anyone under age 15 is classified as “critical missing,” Dickerson explained. But MPD has the ability to classify any person or teen as critical if officers identify substance abuse or other urgent issues.

Since Dickerson came on in December 2016, she has worked to use social media to publicize the cases, most recently with the push in March that caused an uproar with local and national media and leaders. The methods of the investigators have not changed. They still go to the home, query friends and family, and keep at it until the teen is located. But now the discretion level has changed. “I wanted to ensure every case receives the same level of attention,” Dickerson said. “That’s what MPD is doing differently.”

She also wants the mayor’s task force handling the missing teens situation to develop a set of questions or an assessment officers can use when investigating cases. This would help them reach out to the available and pertinent DC agencies to help combat the underlying problem that caused a teen to leave home.

“No matter what door the young person goes through, they would get the help they need,” Dickerson said. “Everyone has the best interests of the child in mind right now, but we all kind of operate independently.” If police can connect a youth to a service that fits their situation, they may feel more comfortable opening up about sexual violence, domestic abuses, or trafficking in a way they may not with an officer, she said.

Understanding the Abused and Neglected
Sasha Bruce Youthwork offers youth ages 12-24 a 24-hour safe shelter from issues like domestic violence, and for more than four decades has given them food, clothes, and a place to clean up, mainly in Wards 6, 7, and 8. Most have been neglected or abused by their families, said Zakiya Williams, who handles development at the nonprofit shelter program.

Sasha Bruce works to provide wraparound service at every step in the process, Williams said. It focuses on housing and reuniting families, but if that’s not possible it finds alternatives, no matter the time. “If something doesn’t work for you, we try to provide help,” Williams said. “We are not putting you through a system that makes you answer to multiple programs – we stick with you.”

Sasha Bruce serves about 200 in its shelter program, about 1,500 youth across all programs, and about 5,500 families annually, Williams said. Young women and men who seek help often come from impoverished situations or homes with a lack of resources and education. The numbers haven’t gotten worse over the years, but that doesn’t mean people can ignore the issue.

“The spike in visibility, we’re excited that people are interested and are becoming more aware of what we’ve been doing for so long,” Williams said. Williams and Sasha Bruce hope the spotlight forces policy change in the city.

Homelessness Adding to Teen Stressors
Homeless teens face an extra stressor triggering the instinct to run, said Playtime Project’s Melanie Hatter, communications coordinator for the program. They live in one room – mom, dad, siblings – where teens have no outlet. “There’s no place for them to act out or just sort of be a regular teenager,” she said. “Many of them are taking on responsibilities that are way over their head.”

Many run straight into the clutches of a pimp masquerading as a boyfriend, or sex trafficking operations or abusive relationships.

Hatter equates the problem to a lack of resources and case management in DC’s services, especially at the DC General Family Homeless Shelter (1900 Massachusetts Ave. SE). Teens need help getting the resources DC offers. Staff need training on how to spot at-risk children.

DC needs to stop treating voluntary runaways as not in crisis. Hatter remembers a 14-year-old teen who ran off several times from the shelter and her family situation. “The last time she ran off, she ended up in California with a pimp who was selling her on the street,” she said.

“In DC, we have an extremely high poverty rate,” Larson said. “Any time there is a high rate, there are going to be family crises.”

In May, the task force released a plan to have police work with Sasha Bruce to help evaluate each runaway teen before they are returned home. The city’s Child and Family Services Agency (CFSA) will build up the program at Sasha Bruce with more staff and an evaluation standard. DC has also launched a new website, www.missing.dc.gov, as a guide for anyone to understand who is considered a missing person, how the police classify the cases, and what resources are available for runaways, and also a list of the open and closed cases.

Sasha Bruce leaders are encouraged by this plan, said James Beck, vice president of planning, development, and evaluation. “Our staff will welcome young people reported as missing and brought to us by MPD, with the goal of offering a safe respite from the dangers of the street,” said Beck, “and then working with family members and guardians to help to resolve issues which have precluded family stability.”

On the shelter side at Playtime Project, the staff view this as a good start, said Hatter. But there is still work to do. “Within the population we serve – youth living in temporary housing – the bigger issue is the current lack of affordable housing and limited social services to address issues before they escalate and push a teen to run in the first place.”

The project is also looking for its first full-time social worker to help build stronger connections between children and their parents in homeless situations. 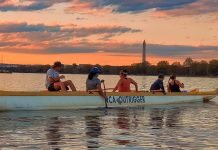 Race for Every Child 5k and Kids’ Dash