Wading Into the Fray
Once a land is gone, what becomes of its nationality? How can a citizenry exist without a country? And what are we going to do with the millions of people expected to flee adverse environmental conditions in the coming decades?

According to John R. Wennersten and Denise Robbins, authors of “Rising Tides: Climate Refugees in the Twenty-First Century,” these questions are no longer theoretical. The world can’t afford to wait, they say, while environmental disasters create “a new human tsunami.” By 2020, an estimated 25 to 50 million people will be forced to leave their homes. Many will be unable to return, resulting in significant upheaval, resettlement expense, and religious and cultural challenges.

Wennersten and Robbins present overwhelming scientific evidence that these disasters are linked to climate change (as if anyone other than the president needed convincing). They cast their net globally, discussing the rising sea levels threatening the coastal towns of Alaska and Louisiana, the droughts and unstable weather patterns in Latin America, the desertification and rising temperatures in Africa and the Middle East, and the water shortages in Asia. The statistics are dire and unavoidable, with loss of livable land fueling hunger-driven civil unrest and making already vulnerable populations prey to violent conflict.

So what to do? The authors point to a number of environmental initiatives that are already making a difference. Reforestation, revising farming techniques, building climate-resistant communities, and waste water recycling are all helping to arrest or slow the degradation of the environment that contributes to the refugee burden. The 2015 Paris climate accord, signed by 188 nations who promised to work toward curbing global warming, was also encouraging—except, of course, that the US, one of the world’s largest consumers of fossil fuel, has now withdrawn from the deal.

Even if efforts to stem the effects of climate change succeed, however, it is only part of the solution. We need global long-term planning to deal with the refugees themselves. “Millions of people are on the move,” the authors write, “and no effective global institutions exist to deal with the problem.” Only limited efforts have been undertaken to improve the underlying economic and political conditions that contribute to the plight of climate refugees and, of more pressing concern, little action has been taken to assimilate migrant populations. In “Rising Tides,” the authors sound the alarm, not only on behalf of millions of displaced souls, but also because, as they note, “Every one of us is or could be a migrant.”

John Wennersten has written nine books about environmental issues, including “The Oyster Wars of Chesapeake Bay,” “Anacostia: The Death and Birth of An American River,” and, more recently, “Global Thirst: Water and Society in the 21st Century.” Denise Robbins is an environmental affairs journalist at Media Matters in DC and writes regularly on global environmental change and related refugee issues.

Problem Solving by the Numbers
Would you be able to measure the length of a soccer field using only a tape measure and a hula hoop? How about determining the height of a tall tree using a yardstick and a ball of string? (No fair climbing the tree!)

In “One Minute Mysteries: Short Mysteries You Solve with Math!,” the father-daughter team of Eric and Natalie Yoder explains how to solve these and other problems using simple math and logic. “Math is the kind of thing that you think you’re never going to use,” writes Natalie, “but that’s not true.” Need to double a recipe for pancakes and all you’ve got is a ¾-cup measuring cup? Want to make sure the tank you’re buying is big enough for your pet iguana? As the Yoders show, these and other real-life situations that can easily be solved with a judicious application of numerical know-how.

“Short Mysteries You Solve with Math!” is the second in the One Minute Mysteries series from Capitol Hill publisher Science, Naturally! Both the new book and its companion volume, “Short Mysteries You Solve with Science!,” are bilingual, with each mystery and solution featuring a Spanish translation on its opposite page. Lively illustrations and kid-friendly stories make this book for children 10 to 14 an appealing and enjoyable way to learn.

But wait, there’s still more! Through August 15, if you buy two of Science, Naturally!’s award-winning science and math books, you’ll get a third one free. Go to www.sciencenaturally.com and enter the code ROCKET at checkout.

The Lyon’s Share
As I’m sure most of you know by now, the Hill Rag lost a promising young reporter two years ago when Charnice Milton was gunned down at a bus stop on her way home from covering a Capitol Hill ANC meeting. The callous thugs who took her life have still not been caught.

While no good can ever come of such ugly and senseless violence, it is at least heartening to know that our colleague will soon have a fitting legacy. On what would have been her 30th birthday in June, a group of authors and literary activists led by Kymone Freeman, co-founder of We Act Radio, met to discuss the founding of the Charnice Milton Community Bookstore.

Housed in the basement of the radio station’s studios, it will be the only bookstore east of the Anacostia River, an underserved area that has the highest illiteracy rate in the city. Freeman is currently collecting donated books and hopes to raise $180,000 for the renovation. “Books are the most transformative thing,” he recently told the Washington Post. “If you can match the kid with the right book, you can change them.”

According to her parents, Charnice’s greatest love was books. In that same interview with the Post, her mother, Francine Milton, recalled her daughter “reading 99 books in a single summer in elementary school [and] reading Shakespeare in middle school.” Her father, Ken McClenton, noted that she was frequently bullied and found refuge in books and libraries. “I see this bookstore as mere justice, not just social justice,” he said. “Even in death, Charnice was not a victim—she was a conqueror.”

To learn how you can help, go to #WeLuvBooks Charnice Milton Community Bookstore.

On the Hill in August
East City Bookshop hosts Book Club in Brief: Essays on Rights and Resistance, with a discussion of “Black and Blue and Blond” by Thomas Chatterton Williams (from “The Best American Essays,” 2016), Aug. 1, 6:30pm; the ECB Fiction Book Club, which continues its theme of Summer Staycation with a discussion of local author Edward P. Jones’s “Lost in the City,” Aug. 7, 6:30pm; and the launch of a new book of poetry, “Crumb-sized,” by Marlena Chertock, Aug. 23, 6:30pm. For a complete listing of ECB events in August, visit www.eastcitybookshop.com. 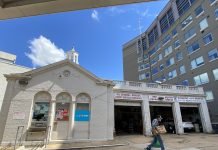 A Little Love for the Congressional Exxon

Liza Colby Brings DC The Good, The Bad and The Dirty...

Grab the Last of the Summer Honey Saturday