Sok “Ann” Reed, owner of Ann’s Beauty Supply and Wigs (125 L St. SE), readily acknowledges that the Riverfront neighborhood that surrounds her business has changed significantly. Ann’s Wigs is one of the few independent operations to outlast the rapid development that has overtaken the area in the past decade. Massive apartment, condo and office developments have appeared and with them new businesses, cafes and restaurants, bars and stores. New faces, too.

But Ann’s little shop remains, huddled now between two massive new buildings on either side. And she says her established customer base keeps coming back.

“My business right now in this community looks a little bit out of place. But I can still do it, because I’ve been doing it in the community —and at Waterside Mall nearby— for thirty-five years. So they know me, they use my shop,” she says.

Love Brings Her Home
Miss Ann, as she is known to her regular customers, has been working in DC’s beauty industry for forty years, nearly as long as she has lived in the United States.

She came to America nearly fifty years ago with her husband Stewart, a native Washingtonian. They met while he was stationed with the U.S. Army in her native South Korea.

“I was nineteen, he was one year older than I was. And we were in love, so that’s how I became American. We married, and I came to America in 1969,” she recounted.

That same year, Miss Ann gave birth to their first child, a daughter; two more daughters would follow. All three attended Mount Vernon High School in Alexandria before going on to college and then to jobs in New York City.

Waterside Wigs
In 1982, she opened Ann’s Wigs and Gifts in Waterside Mall. Her shop was a family business, with her daughters working behind the counter. After his retirement from the Army, her husband occasionally helped out, too.

“We had a great shop. Upstairs was the EPA (Environmental Protection Agency), and Waterside Mall back in the day had a lot of foot traffic. We used to do so good.”

So good, in fact, that Ann’s Wigs became a one-stop shop for many EPA staffers. “They’d tell me, ‘Miss Ann, you are my cookie jar.’ They’d come for a pair of stockings or earrings. During their lunch hour they’d be in and out,” she says.

Onward to L Street
In 1997, the EPA consolidated its employees scattered in offices across the District into the new Ronald Regan Building at Federal Triangle. The 3,800 EPA employees in Waterside Mall departed and with them, much of Miss Ann’s clientele.

Miss Ann remained in Waterside Mall until its demolition in 2006. That year, Miss Ann bought the buildings on L Street SE that now house her business. She renovated two abandoned 100 year-old townhouses, one 700 square feet and another 500 square feet, to accommodate her beauty shop on the main floor and a hair salon on the second.

Initially, business at the L Street location was not as good as in Waterside Mall. But she soon discovered, that with a relative paucity of businesses in the area at the time, her shop could fill multiple needs in addition to hair and skin care.

“At Waterside, they had Safeway, CVS, so they’d carry all the little knick-knacks. But here, there was nothing like that, so whatever they needed I put it in here.” Soon, in addition to a wide selection of wigs, extensions, hair and skin-care products, she was carrying nylons, snack bars, chicken noodle soup and gallons of milk.

The Impact of Construction
However, in her eleven years at the current location, the neighborhood around her has changed significantly. The same year Ann relocated her business, construction began on Nationals Park two blocks south. The new stadium brought with it restaurants, cafes and condominiums.

Ann says the customers have changed with the neighborhood: they are younger, though the bulk of them still look for hair products and extensions.

But she says adapting to the changing customer base has been easy. It is the construction that has caused her stress. For eight of the eleven years Ann’s Wigs has been on L Street, there has been construction on at least one side of her business. She says that the greatest impact that construction has had on her business has been a literal one.

Work on the ‘Insignia on M’ building, located on the west side of her property, has resulted in a number of instances of damage to her building, most startlingly in September 2016 when a crane dropped an object on her roof, damaging the joists and causing leaks. Ann initially had trouble getting the developers to begin repairs, but recently her roof and garage door have been fixed and her building was repainted. But some items still need repair.

Still She Persists
She says the development around her has been stressful, but she is a dedicated small businessperson. Sometimes she gets tired and has considered leasing the building to a restaurant or a dentist’s office.

But Miss Ann is nonetheless optimistic about the future. Around her, the neighborhood changes and the people change within it, but she remains constant.

“You know, 11 years after I moved, some of my old customers are just rediscovering me.” 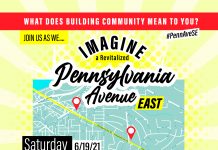 Fight for your Fitness at Old City