Churchill
As one of the singular personages of the 20th Century, Winston Churchill—especially after his death in 1965—has been appropriately featured in popular entertainment. As master politician and statesman, as noted orator and author, as wartime hero and worldly sage—as a generally outsized figure–Winnie was a natural to be depicted in film and television shows on British history.

A number of the greats of English acting have recently portrayed Churchill, such as Albert Finney (HBO’s “The Gathering Storm”), Brendan Gleeson (HBO’s “Into the Storm”), Timothy Spall (“The King’s Speech”), and Michael Gambon (“Churchill’s Secret”). Even Americans have gotten into the act (he was, after all, half American on his mother’s side) with John Lithgow’s towering performance in Netflix’s “The Crown” last year. Now we have a new entry in the Churchill sweepstakes: Scotsman Brian Cox in “Churchill” (opening in DC on June 2, the film is rated PG and runs 98 mins.).

Most Churchillian appearances in TV and film have highlighted crucial periods in his later life, as does the new “Churchill,” written by Alex von Tunzelmann and directed by Jonathan Teplitzky (“The Railway Man”). The difference here is that it focuses pointedly on just 96 hours in the run-up to the D-Day invasion of June 6, 1944. The drama comes in Churchill’s newfound skepticism about Operation Overlord—as the action was code-named—and his contesting it with the Allied commanders, Dwight Eisenhower (John Slattery) and Field Marshall Montgomery (Julian Wadham). The military men, having planned the immense operation for months, want to launch as soon as the weather allows, while Churchill, harboring vivid memories of World War I misadventures, is reluctant to commit tens of thousands of “our boys” to another potential slaughter (visions of Gallipoli in 1915 seize his mind).

The four-day squabble between these men forms the heady drama, the arguments mitigated somewhat by the reasoned advice of Field Marshall Jan Smuts (Richard Durden) as Winston’s adjutant, and the levelheaded calm of Clementine Churchill (Miranda Richardson) who knows the great man’s moods better than anyone. The tension is heightened by Churchill’s errant behavior, compounded of too much Scotch, a seriously depressive personality, and the flooding war memories. Much of what the prime minister actually went through in those four days is not exactly known, but it makes for a tense, tick-tock movie.

Cox carries off the impersonation well, offering a good range of the man’s moods and mannerisms. Richardson is very fine as wife “Clemmie.” You get the patience and tough love she exhibited to regulate her fury of a husband, especially at this watershed moment. Her chastening of him, balanced with her careful encouragement, is delicately portrayed; she realizes that he needed her to counterpoise his almost demonic personality.

Much less successful is the sadly miscast John Slattery as Ike. Slattery, well-remembered from “Mad Men” on television, essentially repeats his demeanor on that show: fast-talking, sarcastic, and brusque, totally at odds with the real Eisenhower, who was deliberate, even halting in speech, but with a warm timbre. Moreover, there is almost no resemblance, except perhaps for his army cap.

It’s no matter, the picture is Cox’s to succeed or fail. He mainly succeeds.

Short Takes:
Obit
A movie about obituary writers? What a drag… Hold your horses, because the new documentary “Obit” is a fascinating look into an essential bastion of journalism as it is practiced in The New York Times. It must be remembered, as one of the obit writers states, that the death of a notable person is summarized in about a paragraph; 90 percent of the content is the celebration of a person’s life (the film is unrated and runs 95 mins).

The film follows ten or so of the obit staff, featuring one of the best, Bruce Weber, beginning his research, as they all do, by talking respectfully with the deceased‘s family to get the details right. Weber’s research, on a once prominent government official, becomes a leitmotif for the film as he takes all day to craft a personal story and makes his deadline. All of the writers interviewed are articulate and philosophical, confirming that you also have to be of a “certain” age to really craft the arc of a life.

Many stories of individual obits are intriguing, such as the overnight rush to capture a meaningful summary of an event-filled life when a popular celebrity, such as Michael Jackson or Robin Williams, dies suddenly. In such cases, the paper’s morgue serves, but it is the writer who must make the life cohere. “Obit” makes a trilogy of fine New York Times documentaries along with “Wordplay” from 2006 and “Page One” from 2011. It is a fine addition to that line.

A Quiet Passion
Terence Davies, an English writer/director of taste and refinement who takes literature seriously, examines the sheltered, mysterious Emily Dickinson in “A Quiet Passion,” trying to bridge the gap between her uneventful life and the inward fervor of the poet. He chooses a highly stylized manner to depict the Amherst maiden, and his effort results in hits and misses.

The staging of “A Quiet Passion” is sedate and often striking: most scenes have a fixed camera view of a Victorian interior wherein the protagonists deliver their ever-articulate lines, varied with a minimum of invisible cuts. Such dead-on filming can be wonderful, such as a tour-de-force time lapse of the Dickinson family as each ages over a 20 years period. But that fixed stare also makes Emily’s torments (of Wright’s disease) excruciating to watch. Whether Cynthia Nixon’s writhing in these scenes, as the fevered Emily, is good acting or just gratuitous voyeurism is up to the viewer to decide.

Davies, in his screenplay, again aims for the stylized, with dialogue that is both—sometimes in the same lines—pithy and arch. All of his family principals, played by Nixon, Jennifer Ehle and Duncan Duff as her sister and brother, and Keith Carradine as her strict father Edward, seem participants in a strange kind of Oscar Wilde play, but this time it’s a somber drama. Only Ehle, as Emily’s ever-sympathetic sister Vinnie, seems a fully rounded character.

Nixon has the tough job of portraying an outwardly contrary and naïve scold whose genius was in her writing. Appropriately, Davies has littered his script with numerous lines from Dickinson’s poems in over voice, and they add resonance in every scene they appear. Luckily for Davies, his protagonist provided him with her best lines for last, the poem, “Because I Could Not Stop for Death” which perfectly closes the picture with Emily’s melancholy burial.

See “Colors of Quarantine” at Frame of Mine 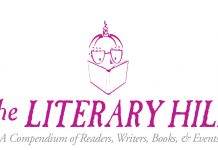 The Literary Hill: Noir at the (Legal) Bar