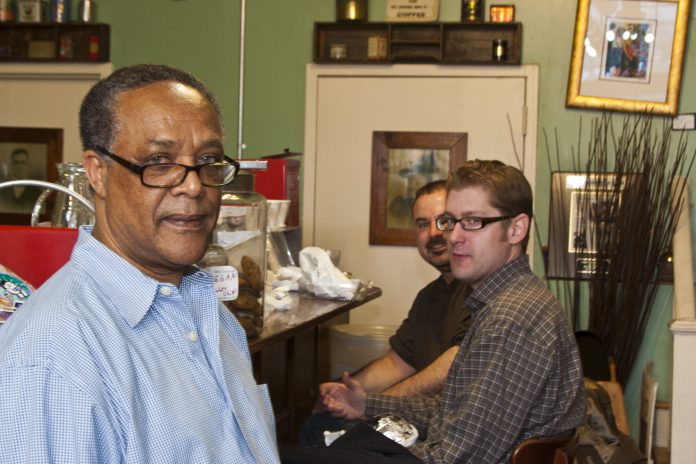 Kenfe Bellay holds several jobs as co-owner of a streetside staple, a stopover for a posse of regulars seeking caffeinated infusions (i.e., coffee) on H Street NE – the storied Sidamo Coffee and Tea.

First of all, he runs the place. His generous grin beckons and his eyes twinkle with hospitality bred in the bone. Second, he is basically the mayor of H Street NE. When perched chatting on a high seat at a small round table in the shop’s entryway, passersby wave at him, and he smiles and waves back.

Bellay has seen it all from his perch. He and his wife founded this oasis for all things Ethiopian coffee, including its traditional coffee ceremony, 11 years ago, when H Street was still a long, sad strip of abandoned buildings, the dreary detritus of urban decay.

That was then. This is now. Today’s H Street NE is a thriving corridor on the northern edge of Capitol Hill that boasts construction cranes towering over two- and three-story vintage storefronts. One of those is Sidamo. “This is a typical neighborhood coffee shop,” says Bellay with simple pride stemming from his immigrant roots sunk deep into the local soil. “That’s all I want to be,” and he gestures to his chest, “It’s from the heart.”

Eleven years ago, however, it wasn’t so easy. Twice his shop suffered breakins when front windows were smashed open. You wouldn’t know that today. Inside is a true oasis from the urban bustle and its madding crowd. From the soothing green walls, adorned with photographs for sale, to the floors laid with salvaged 86-year-old wood, the counter of chestnut made by Bellay’s landlord, and the fresh air in the back garden, Sidamo calls us back to a time of tradition and ceremony, when Ethiopian villagers gathered for a daily ritual, to roast and brew the nation’s prized arabica coffee beans, and in such gatherings to exchange information and to build community.

Bellay, who lives in Silver Spring, was born in Ethiopia’s capital city, Addis Ababa. He was forced, at age 20, to flee during the Red Terror launched by the murderous regime of military dictator Colonel Mengistu. He crossed the border into Sudan. Two years later he was in Germany, and in 1986 he emigrated to the US.

Eventually the heady aroma of his native land – the coffee bean – summoned him to open Sidamo, named for one of the nation’s provinces and its prized coffee bean, spicy and medium-bodied. Today he offers three single-origin Ethiopian coffees, each completely different: the Sidamo and two others, the Yirgacheffe (fruitier) and the Harar (full-bodied mocha flavor), plus many more brands.

Coffee was born out of Africa, just like all of humankind. One legend is that a herder named Kaldi noticed something odd one night. His goats were on their hind legs, dancing with gusto. He observed they had been eating the leaves and fruits of the tall shrub we call the coffee tree. Soon the coffee fruit was being eaten in the boy’s village, and, Bellay says, “everyone in the village was happy.” The next step was to roast the seeds, grind them, and boil them. Coffee!

Ninety percent of all US adults consume caffeine daily. The seductive secret is caffeine’s stimulant effect, as well as the heady aroma of the roasted beans.

Sidamo’s distinctive appeal is that it’s the real deal. All its coffees are single-origin, and most are not blends. All are fresh-roasted on-site two or three times a week. Every Sunday at 2 p.m. there is the traditional Ethiopian coffee ceremony – a ritual wonder to behold. And no other place boasts Kenfe Bellay himself, the mayor of H Street!

David Hoffman, a freelance journalist, lives three blocks from Sidamo and considers it a privilege and an honor to sip coffee there. He is also vice president for programs at the historic Woman’s National Democratic Club (where men also are members), in Dupont Circle.

Listen: “I Hate it Here”