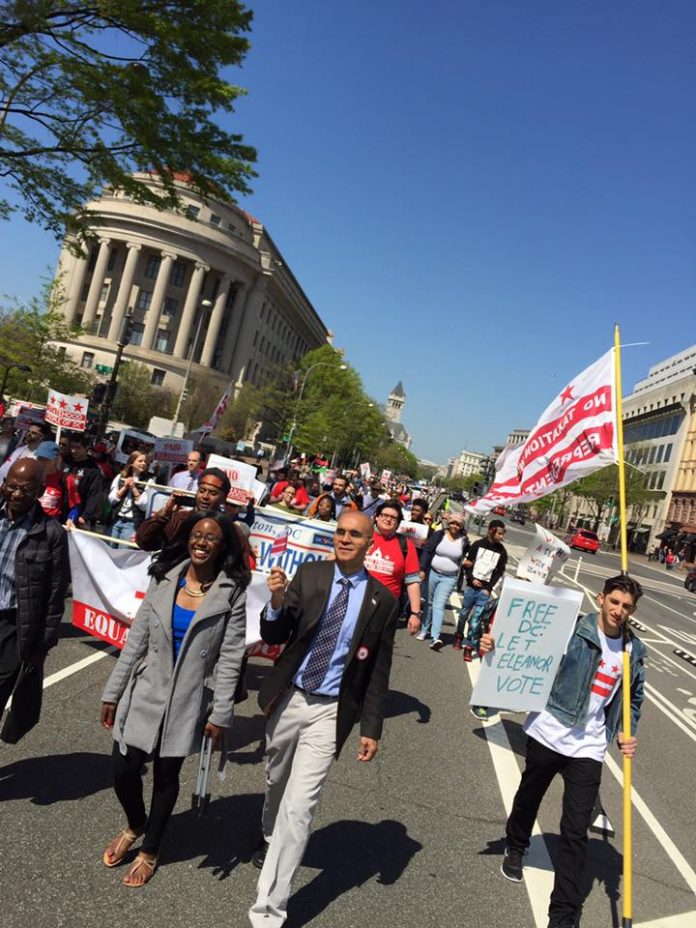 A Virginian named Tom Garrett and a Floridian named Marco Rubio want to gut our gun laws. An Ohioan name Brad Wenstrup and an Oklahoman name James Lankford want to overturn our death with dignity law. And an insecure Utahan named Jason Chaffetz lords over the District like King George himself, spending more time meddling in our local laws than serving as a check on arguably the most corrupt president in our nation’s history after only two and a half months. None of the aforementioned of Congress were elected by the people of DC, yet they have more say over our laws than our own local officials.

We have no vote in Congress, but that does not mean we should roll over and give up. Instead we should regroup, organize, and get even. This meddlesome Congress has spurred new energy in the movement for greater democratic rights via the #HandsOffDC initiative spearheaded by Councilmember Charles Allen.

While it is vitally important to embrace and be active in this new movement, it alone will not end congressional meddling. Only statehood can do that. We need to use this meddling to bring new people into the statehood movement and teach the nation about our unequal and unjust status. Here is a rundown of how each of us can contribute to the cause:

Host a Meet & Greet. The best way to build a sustainable movement is through personal connections. Invite friends and neighbors to your house for a statehood meet & greet to discuss our work, answer questions about the issues, and suggest concrete actions we can take to strengthen the movement.

Write an Op-Ed. Use your friends or family in places outside of DC as conduits to get op-eds published in the 50 states to educate the nation about our unequal and unjust status as well as our fight for equality via statehood.

Attend the Tax March on April 15. The tax march is geared to raise awareness about our president’s unwillingness to release his tax returns. This is a great opportunity to reach a national audience. Make signs that highlight “Taxation without Representation” and join us to raise awareness. In 2015 we in DC contributed $26 billion in federal revenue, more than 20 other states.

Host Marching Family & Friends. There will be a Science March on April 22 and a Climate March on April 29. If you open your home to friends and family attending these marches, use that time to educate them on statehood. Let’s be intentional and make sure that every time a visitor comes here to advocate for a cause they care about, we teach them about our status and give them tasks to help us when they return home. We need our family and friends in the 50 states to become our advocates.

We will not be a state this month or next month, this year or next year, but we can act now to start building the movement. The Tom Garretts, Marco Rubios, and Jason Chaffetzes of the world will come and go. They meddle in our affairs because they can, and they cannot control themselves. The only way to liberate ourselves from their meddling is by achieving statehood, and we must be more intentional and better organized to make that a reality.

If you want to host a statehood meet and greet, write an op-ed for statehood, or help spread the word about our status and cause at one of the upcoming marches, send us an email and we will help get the tools you need. Visit www.the51st.org to get involved.

Arrest Made in August 2019 Southwest Homicide