On a chilly January morning I pulled up to an old stable located in an alley off of Florida Avenue in DC’s Trinidad neighborhood. An exuberant man popped out of a door. “You found it! Welcome to my Dwell!”

With that I entered into David Bernhardt’s Dwell, the “tongue-in-cheek” name he gave this project when his wife told him that she would live in any abode as long as the end product would be worthy of a writeup in Dwell, an architectural and design magazine and blog. What makes Bernhardt’s Dwell unique is that he’s building it to have off-grid, net-zero energy, producing his own electricity, heating, cooling, and even water on site.

Bernhardt bought the vacant 100+ year-old former stable 10 years ago. Long abandoned, it had no roof, electricity, or running water. The Dwell idea came to Bernhardt as an evolution of sorts. He’d started buying up some long-abandoned buildings on H Street NE in the 1990s. He and his family moved into an old livery stable at Eighth and H streets NE where he began applying green living models including a green roof and a rain barrel. With Dwell he’s taking lessons learned to a new level. In his words, he’s created a “hyper-local, stone soup model,” bringing in expertise from friends, neighbors, and his own family.

How do you go net zero in a structure in the middle of DC? It takes time, creativity, and passion – and some financial resources.

Dwell’s electricity is supplied by four solar panels along with some impressive storage batteries. Bernhardt notes, “I’m doing this project bit by bit. My birthday is coming up, and I’m getting 10 more solar panels. That should allow us to store enough energy to be able to run the lights, ceiling fans, and even some air-conditioning without risk of running out of power.”

The ambient warmth and hot water are provided by a wood stove that pipes hot air throughout the 2,400 square-foot structure. Water – even that for drinking – is harvested off the roof and stored in a 1,500-gallon tank on the ground floor. An aerator keeps the water clean. Per Bernhardt, his regular testing shows the water quality to be on a par with or better than what DC Water supplies. If it starts tasting funny, he drains the tank, cleans it, and refills it.

Michael “Max” Grove had fun installing the insulation. “David knows no barriers. He threw the net-zero challenge to us. We figured it out together. The testament to our work came when we were cleaning up. We were all sweating and realized the carriage house had heated up to 85 degrees F. The new insulation was doing its job. Mission accomplished.”

Bernhardt agrees that installing the insulation has been a game changer. “We’re heating this entire space with one wood stove. I can’t wait to see how it works this summer!”

Bernhardt is incorporating sustainability into every aspect of the structure. “Since there was no roof on the building when we bought it, the new roof is reinforced to support our green space, including a garden plot and maybe even a fish pond.”

He’s also shopped around and done dumpster diving for some of Dwell’s appointments. “This flooring came out of an old warehouse in Baltimore. I’ve purchased bathroom fixtures from Community Forklift, and I found a great light fixture in a dumpster down the street.” Next steps, beyond installing the additional solar panels, include working with his son to construct interior walls and ceiling, all designed to promote ambient airflow through the structure.

Dwell is an adventure in net-zero urban construction – and eventually living. The upkeep on Bernhardt’s rental properties and his own current home keeps him busy, so Dwell is a place he goes to relax, learn, and experiment – a sort of above-ground man cave. He’s enjoying the journey as much as he’s looking forward to reaching the point where his wife will be willing to move in. Who knows? Maybe one day you’ll see this former livery stable featured in Dwell magazine!

Catherine Plume is a lifelong environmentalist, a writer, and a blogger for the DC Recycler: www.DCRecycler.blogspot.com; Twitter @DC_Recycler. 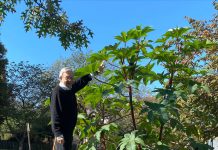 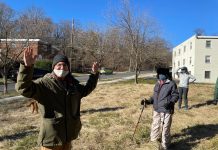