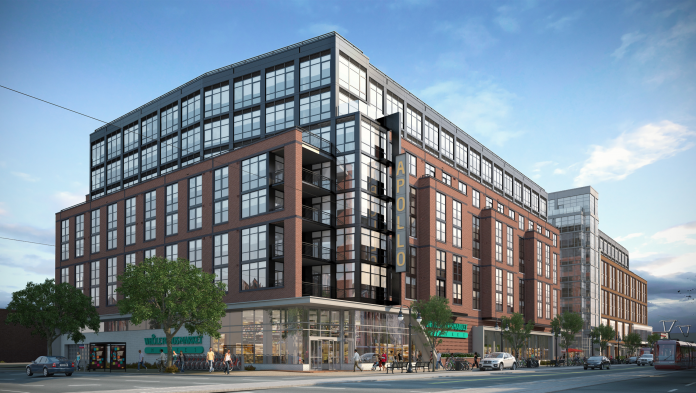 It’s been many months in the making, as onlookers could only gawk at first – through open windows into a vast empty space. At last, the latest DC Whole Foods Market opens with a flourish of community engagement and the heady aroma of scratch-baked bread, in a traditional bread-breaking ceremony on March 15.

“We’re thrilled to join the thriving H Street neighborhood,” says the store’s team leader, Donovan Morris, a 26-year Whole Foods Market veteran. “We’re offering a unique, exciting grocery shopping experience and a new destination for fast casual dining with gathering places for the community,” he declares at the store’s site, which anchors the intersection of Sixth and H streets NE, at one corner of the sprawling Apollo retail and residential project, once the spot of a longtime H Street fixture, Murry’s grocery store.

Each Whole Foods Market store is shaped to “fit” its community, explains Michelle Tafazoli, DC-based specialist in marketing and community relations. This one reaches out to all four corners of the rapidly changing local community east of the Capitol. “I’m the boots on the ground,” Tafazoli, declares, with assurance based on over two years of such efforts for other stores in the DC area. She emphasizes that all Whole Foods Market stores focus on a commitment to high-quality products and transparency in labeling. They offer meats and poultry, for example, that are third-party audited for animal welfare such as free-range livestock and cage-free hens.

Each store is designed also to reflect the community with a focus on a local, “locavore” style. Tafazoli’s colleague in community relations, Todd Schrecengost, puts it this way: “We want to pay homage to the community.” Schrecengost became involved with Whole Foods Market following work with urban agriculture and as a volunteer with the Anacostia Riverkeeper. He explains that Whole Foods Market donates to groups like City Dogs Rescue and the Atlas Performing Arts Center, as well as offering help to local public and charter schools through the Whole Kids Foundation to promote garden plots for raising produce for school salad bars.

Even so, a Whole Foods Market store makes a large footprint, and sometimes mom-and-pop store owners wince at the arrival of a big-box competitor. The new store is also a harbinger of further gentrification along the so-called Atlas arts corridor of H Street NE, where streetcars whisking silently past the many boutiques and art galleries add a trendy European touch to a once forsaken neighborhood.

Today’s new store welcomes pedestrians and bicyclists, says Tafazoli. Locals may be equally interested in the 160 underground parking spots that the store boasts.

The store’s 150 team members include butchers and bakers, but no candlestick makers, yet. There are fishmongers, however, and a team of chefs.

Whole Foods Market invites residents to attend the opening event, at 8:45 a.m. on March 15, for the bread-breaking ceremony and an array of door-buster deals, product demos, and free samples. The new store is at 600 H St. NE.

David Hoffman is a freelance writer who lives and works a block from the new Whole Foods Market store. He is vice president for programs at the Woman’s National Democratic Club, founded by suffragettes and now including many men as members, housed in the historic Whittemore House on Dupont Circle.