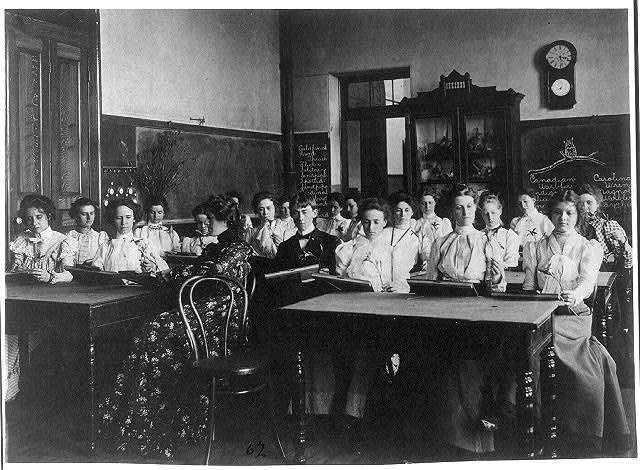 The road to the integrated school system that exists today in the District of Columbia has its roots at the beginning of the 19th century when, in 1804, an Act of Congress established a permanent institution for the education of the youth of the city of Washington. The Act did not include African American children, but its passage served as the impetus for the establishment African American “schools” starting around 1807, many of which were located in African American churches. It was from these beginnings that the current educational system evolved.

For the first half of the century progress was slow and setbacks were frequent. This was a time when the prevailing attitude of many whites was that an educated slave population was a threat to authority and civil stability. There were those who used incidents such as the Nat Turner Slave Rebellion of 1831 and the related “Snow Riots” of August 1835) as reason to disrupt the strides being made. Intimidation and outright property destruction were used to stymie the advancements in African American education.

In 1851, the first official school for African Americans was established using private funds from the likes of Reverend Henry Ward Beecher, a prominent Quaker, as well as his cousin and author Harriet Beecher Stowe, and Dr. Gamaliel Bailey, editor of the abolitionist newspaper The National Era. Named the Normal School for Colored Girls (later, the Miner Normal School and subsequently Miner Teachers College), it was founded by Myrtilla Miner, a white pioneer of African American education. Her goal was to create a model teaching facility for blacks; the school is today considered to be a predecessor of the University of the District of Columbia.

Although the school’s curriculum included history, philosophy, geography, literature, and astronomy along with classes in domestic skills, hygiene, and a science — it quickly developed into a training ground for future teachers. In fact, for almost a century through various name changes, Miner educated the majority of African American elementary school teachers employed by the D.C. schools. That was significant because the face of education in the District was undergoing a major change as a result of emancipation.

The enactment of the DC Emancipation Act in April 1862 lead to the passage of a law titled: An Act providing for the education of colored children in the cities of Washington and Georgetown, District of Columbia and for other purposes. A separate board of trustees for black schools worked parallel to the board of trustees for white schools. With the onset of mandatory education for all children of school age, that same year Mayor Richard Wallach moved to obtain funding for the construction of a series of new school buildings throughout the community. This was quickly followed by a restructuring of the school system that by 1864 saw the introduction of a graded system that was introduced as well as high schools and teaching schools. Legislation also provided for a more equal distribution of funding for white and black schools.

On March 1, 1864, the first publicly funded free school for African American children opened in Little Ebenezer Methodist Church on Fourth Street, SE a block south of Seward Square on Capitol Hill (the church is still operating at that location.) It was run by Emma V. Brown, a young African American from Georgetown who studied under Myrtilla Miner at the Normal School for Colored Girls. With assistance from Frances W. Perkins who had been sent from Connecticut by the New England Freedmen’s Aid Society of Boston, she undertook the task of teaching 40 African American students of all ages in the one-room facility at the church. But interest and demand in the school was overwhelming and enrollment soon grew to over 100, far more than could be accommodated at Little Ebenezer.

Recognizing the burgeoning demand for education in the African American community, Francis Perkins undertook the task of raising funds from her contacts back in New England and elsewhere. Primary to this undertaking was a $1,000 donation from a patron she knew from Connecticut, which led to the purchase of a lot on C Street, SE between 2nd and 3rd Streets where a two-story structure comprised of two teaching rooms on each floor was ultimately constructed in the winter of 1864.

The school was named Lincoln and functioned as the primary publically-funded learning facility on Capitol Hill for African American children until 1871, when it was replaced by a brick school about four times the size.

The Lincoln School was not the only school for African American children in the District of Columbia (although it did also service as the administrative headquarters for the DC Superintendent of Black Schools). After the 1862 Act that provided for the development of African American schools, additional legislation allowed a more fair distribution of funds between segregated schools. But integration as a result of the 1954 ruling Brown v. Board of Education (and in the District, the lesser known but equally important 1953 ruling in District of Columbia v. John R. Thompson Co., Inc.) was a long way off. For the remainder of the 19th century, segregated schools remained the norm, although important African American institutions continued to be built during this time including: John F. Cook School (1867), Stevens School (1868) and what many considered to be the crowning glory of black schools at the time, Sumner School (1871-72.)

John F. Cook, Jr. erected a school for black children in 1867 and named it after his father, the late John F. Cook. A lifelong educator, Cook was also on the board of trustees and executive committee for Howard University (1875-1910) and served on the District’s Board of Education (1906-1910). The school is located at 30 P Street, NW.

The Thaddeus Stevens School is a historic African American school located at 1050 21st Street, N.W. An addition was built in 1885 and it was partially rebuilt and enlarged again in 1895-96. A pioneering school for African-Americans, it was named for Thaddeus Stevens, the Radical Republican abolitionist congressman from Pennsylvania. The Preparatory High School for Negro Youth was originally housed in the basement of 101 N Street, NW, home of the Fifteenth Street Presbyterian Church and then was housed in the Stevens School after it was founded in 1871. The speaker for its first graduating class was Fredrick Douglas. It later moved and became the M Street High School and ultimately Dunbar High School. The building was listed in the District of Columbia Inventory of Historic Sites in 1972 and then on the National Register of Historic Places in 2001.

The Charles Sumner School (17th and M Streets, NW) was constructed in 1872 and named for US Senator Charles Sumner, a major figure in the fight for abolition of slavery and the establishment of equal rights for African Americans, it was one of the first public school buildings erected for the education of Washington’s black community. Charles Sumner fought for the abolition of slavery in the District of Columbia, the creation of a Freedman’s Bureau, the admission of testimony from African Americans in the proceedings of the US Supreme Court, pay for black soldiers equal to that of whites, and the right of African Americans to use streetcars in the District of Columbia.

These groundbreaking institutions, along with others that came to be in the District as the result of growing needs during the latter part of the 19th century, each have their own rich history. They are the outgrowth of visionaries who recognized the importance of quality education for all, and served as forerunners to today’s educational system.

Historical Society Reopens at the Newseum