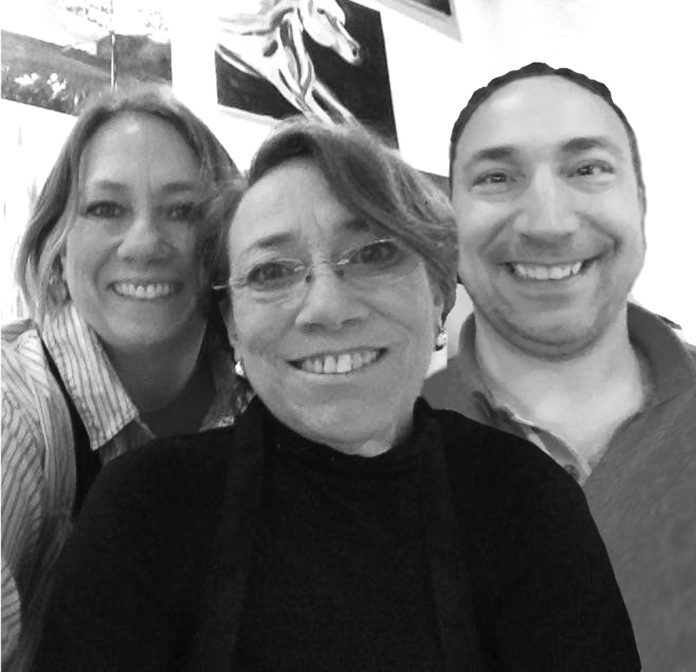 Karen Voellm has been in my life for almost four decades. She was one of the first people I met when I moved to Capitol Hill. We became friends and stayed friends. Just 10 days before her death we were talking about how my dog Marcello and I were going to visit her and her beloved companion, Scooter, in upstate New York in the spring. Our dogs were best of friends.

Karen died February 16 at her home in Poestenkill, New York after a long illness. Karen moved back to her place of birth in 2012 to be near family. I believe though, that Capitol Hill was where she most felt at home. She moved to DC in 1974 with two young children in tow. It was here where she raised her kids, established roots, made friends and built her career. While Karen was working full time she also earned her Bachelor’s degree in Management Accounting.

“She was always trying to help people,’ said Karen Saffron, a long-time friend. “When I first met her she was at AARP. She had a definite idea about what direction she was headed in and she stayed the course. I was so amazed that she could work, raise and support her kids alone and go to school full time. Many would have just given up. That says a lot about a person’s character. No matter what obstacle she came across, it wasn’t a stumbling block for her. She’d just go a different way.”

Karen was unassuming and humble. She never looked for credit or recognition for the good things she did. When she saved Karen Saffron’s life by dislodging a carrot with her finger that had stuck in her throat obstructing her airway Karen calmly said, “I would suggest you not eat carrots again unless you cut them up first.”

As a realtor for 16 years at Coldwell Banker Capitol Hill, she touched hundreds of people’s lives in ways she never imagined. Corey and Lillian Ruiz Ramsden were a young couple who had no idea what they were doing when they came to Karen to buy a house. “We knew we wanted to live on Capitol Hill and raise our family,” Corey said. “She patiently showed us every house we wanted to see. Finally when we found the one that was perfect, we couldn’t pull the trigger because of this little worry or that little doubt. Karen said, ‘Don’t be stupid. Buy this house.’ We did. We stayed, and raised our family here. We love our neighborhood, our friends and our village and in no small way it started with Karen and her friendly but tough push.”

I could always depend on Karen. She had a wealth of practical knowledge and a deep sense of right and wrong. She was always full of good advice, (sometimes not always appreciated).

Don Denton, the branch vice president at Coldwell Banker, remembers Karen as, “someone who I could go to for an honest and ‘to the point’ answer. She was a consummate team player. She was also important to me and to my family. I remember bringing my son to the office as an infant and she was always there to give that nurturing touch. She was also there to give me parenting advice. It was a real loss to us when she decided to return to her home in upstate New York.”

Karen’s business partner, Wes Grooms, credits Karen for mentoring him and encouraging him to switch from his corporate job into a real estate career. She not only gave him the wisdom from her professional experience, but taught him life lessons. He recalls one in particular that reminded him of Karen’s wisdom and kindness. She was a fantastic cook. “It was one of those times I was over to dinner. We were chatting at the table. I was talking about a painful issue I had with a friend. Karen said, ‘You don’t always have to be right.’ She meant ‘right’ as in ‘correct’ with the other person being incorrect. She spoke from experience. Being ‘right’ often got in the way of a valued friendship. Karen helped a myriad of friends and family over the years, all with the desire to help them have a better life.”

A memorial service for Karen will be held at St. Peter’s Catholic Church on 2nd Street, SE on Thursday, March 9 at 5pm. The celebration of Karen’s life will continue immediately following the service at Tunnicliffs Tavern at 222 7th Street, SE.