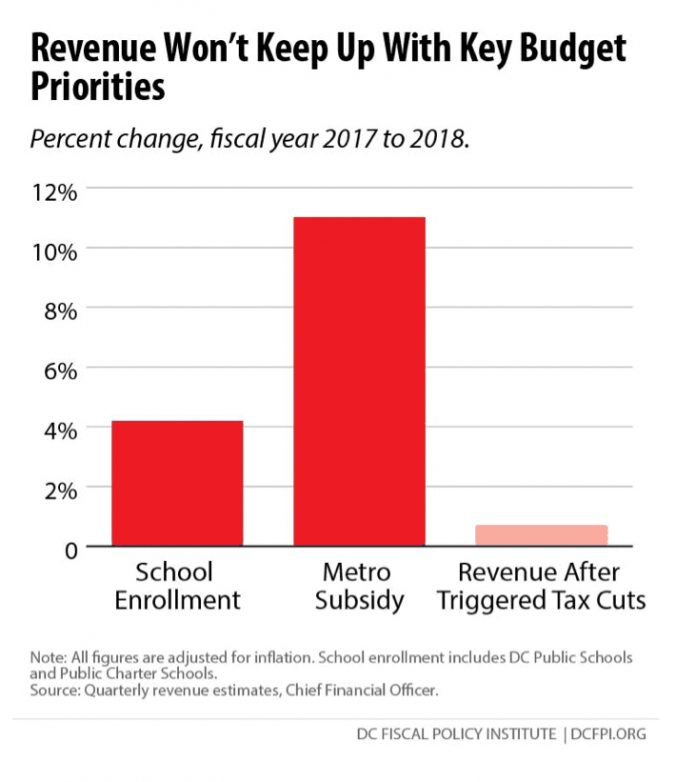 The District’s economy is healthy and adding businesses, jobs, and residents. That’s good news as Mayor Bowser and the DC Council begin work on the budget for fiscal year 2018, because it also means that DC’s revenues are growing. That should be an opportunity to address our biggest challenges: the staggering loss of affordable housing, the highest homelessness rate among large US cities, a Metro system badly in need of repairs, and rapidly rising school enrollment.

Instead Mayor Bowser and the DC Council operate with their hands tied behind their backs when it comes to budgeting. This has nothing to do with Congress. It has to do with us.

Restrictive fiscal policies adopted by DC’s leaders limit their ability to maintain a vital city. Rather than having choices over how to use growing resources, the DC Council mandated three years ago that all new revenue go to tax cuts, by legislating a series of tax-cut “triggers” whenever revenue projections increase. The District’s hands are further tied by a policy that binds any leftover money at the end of its fiscal year, requiring that every penny of a surplus goes into savings.

Tying DC’s hands this way also will make it hard to respond to federal budget cuts to healthcare and other safety net programs that are likely to occur in the coming years.

It doesn’t have to be this way. Because the constraints are self-imposed, they also can be undone.

This spring the mayor and DC Council can change the rules that constrain their choices to put together the best budget possible for DC residents.

Tax Cuts Are DC’s Top Budget Priority
Normally, rising revenues mean that policymakers have choices. Should we invest more in schools, roads, public safety? Should we use some of this gain to reduce taxes for businesses or residents? Should we do some of both?

Actions taken three years ago by the DC Council took away that choice and instead dictated that growing revenue would all go to fund a series of specified tax cuts. Some $100 million in tax cuts has been triggered so far, with another $140 million to go.

Many of the tax cuts make sense because they will make our tax system more progressive. What doesn’t make sense, however, is the pace of implementing them. You probably did not know that tax cuts are now the city’s top budget priority – over schools, housing, healthcare, or anything else.

The cuts mean we are not able to respond to urgent needs that may arise. Take Metro and schools. Next year, DC’s Metro contribution will grow more than 10 percent, and spending on schools will need to grow 4 percent to accommodate enrollment and expected teacher contracts. With mandated tax cuts, meeting these demands may force cuts to other areas of the budget. 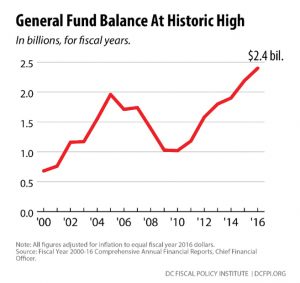 An Overly Cautious Savings Policy
What might you do if you end the year with a little extra money in the bank? Maybe you’d replace that beat-up sofa you really hate, or repair the roof that is past its prime.

The same is true for DC. We could invest some of the surplus in things like school construction or housing. Except we can’t.

Under current rules the only choice when DC ends the year with a surplus is to put that money into savings. The District just announced another surplus, but none of the $222 million is available to be spent because of this rule.

DC’s General Fund balance – our accumulated assets, including various reserve funds – has grown substantially in recent years, to $2.4 billion in 2016 from just over $1 billion in 2009, and is now at a record high. Largely as a result, the District’s finances are ranked ninth-best in the nation.

That money could be put to good use to create more affordable housing, renovate more schools, or pay the startup costs for the new paid family and medical leave program. But not as long as we have a policy that requires all surplus funds go into savings. Once again, we have adopted a policy that takes away choices and keeps the city from doing things that could make a big difference to a lot of residents.

Prepare for Federal Budget Cuts
As if our local challenges were not enough, DC faces imminent threats from federal leaders keen on scaling back safety-net programs, cutting other funding that states and cities rely on, using fiscal threats against sanctuary cities, and targeting the District specifically.

Untying DC’s Hands
With challenges like these, flexibility over access to DC’s resources is critical. Here’s how to do that.

First, the District should delay triggering any tax cuts for a year. That will free up millions to address housing and human services, schools, Metro, and more.

Second, we should use at least some of last year’s surplus for things like affordable housing or the startup costs for paid family and medical leave.

Third, we should put some of last year’s surplus aside in a special fund to address federal budget cuts that come after the DC budget is adopted. This will help us get through 2018 and give time to adjust to the new federal budget environment.

The path to untying the District’s hands this budget season is clear. Now it’s up to Mayor Bowser and the DC Council to take the steps to get there.

Ed Lazere is executive director of the DC Fiscal Policy Institute (www.dcfpi.org). DCFPI promotes budget and policy solutions to reduce poverty and inequality in the District of Columbia and to increase the opportunity for residents to build a better future.