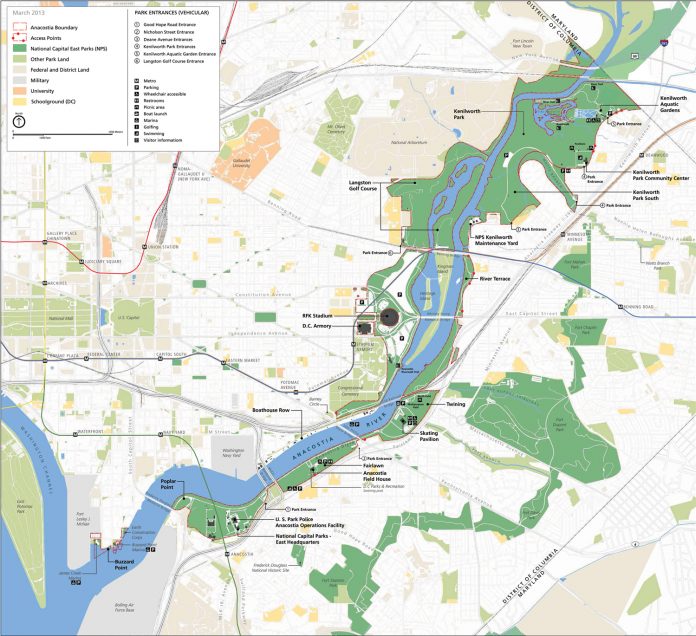 For nearly all of us, the closest open space and encounter with nature is the park land along our Anacostia River. Now we can all help plan the future look and appeal of that space, because the National Park Service has the Anacostia Park Management Plan and Environmental Assessment open for comment by March 18.

The plan is considered the primary guidance document for managing the park for the next 15-20 years. It sets out goals for the natural areas, cultural sites, public recreation, and waterfront management for all 1,108 acres of parkland. It also provides nearly 200 pages of background information, issue analysis, and proposed uses and activities for all areas of the park.

Your homework assignment is to read the report and provide ideas and reactions to the Park Service by March 18. You can find the document at http://parkplanning.nps.gov/anacostiagmp. Send comments online or to: Env. Protection Specialist re: Anacostia Park Management Plan, National Capital Parks – East, 1100 Anacostia Drive SE, Washington, DC 20020.

The plan considers the best mix of uses for the land and sets out three options (Nos. 2-4) as well as a “no action” alternative (No. 1). The options, going from 2 to 4, put increasing emphasis on natural area preservation at the expense of other uses such as recreation or community activities. The Park Service prefers option 3. Acreage allocations are set forth in the table, but the document does not provide the acreages for current land uses.

The park covers the entire east side of the river from the Maryland-DC line near the New York Avenue bridge over the river, all the way to the South Capitol Street Bridge, including the Kenilworth Aquatic Gardens and Poplar Point. It also includes the Kenilworth Athletic Fields, site of a DC dumping ground that will revert to the city once it has been cleaned of toxics.

On the west side the park is more splintered. It runs intact from the DC line to Benning Road, including a thin strip along the river past the Arboretum. It also runs in a thin and interrupted strip from Benning Road to the 11th Street Bridge, with Kingman and Heritage islands excluded as city property and most of RFK Stadium and surroundings under long-term lease to Events DC. Below the bridge are a few pieces including a small park and marina at the tip of Buzzard Point.

The plan seeks to give coherence to all this by providing a framework for future decisions by the Park Service and others regarding operations, resource protection and restoration, and partnerships. The overall goal is to establish a “signature urban park” with high-quality inspirational, natural, and cultural spaces along with recreation and education for urban communities.

The Park Service must address many challenging issues in trying to manage the future of the park. The central one is the need to balance the variety of visitor experiences to maximize the value of each and to minimize conflicts. You cannot have picnics on an active soccer field or contemplate nature while a kindergarten field trip marches by.

Other key issues are contaminated sites in or near park land; protecting natural resource areas; improving access (roads, bridges, and railroads block the east side, and roads, a railroad line, a stadium, a golf course, and a cemetery restrict the west side); archeological sites; and historic and cultural resources, for example Kenilworth Aquatic Gardens and the Langston Golf Course.

Some of the plan’s most interesting parts describe the past, the present, and the foreseeable future of these and other places along the river. Here are some of them.

Anacostia Riverside Trail. The Eastside Trail is now complete, although the long-term plan is to relocate the portion that skirts the Kenilworth playing fields down along the river once the toxics from the fields are cleaned up. A hiker/biker bridge from the trail to the Arboretum is in the works.

Langston Golf Course Rehabilitation. The focus will be on erosion control and stormwater management, including new cart pathways and a strip for the West Side Trail along the water.

Wetlands and Resident Goose Management. The Park Service recently adopted a plan to reduce the number and impact of the Canada geese in wetland areas, where they are eating grasses beyond their ability to regrow.

Anacostia Watershed Restoration Plan. This is the Park Service partnership with the Department of Energy & Environment to carry out a comprehensive effort to reduce toxic sources and levels in the river and eventually make it fishable and swimmable. It includes reducing sources from upstream, from old industrial sites, and from sediments. Estimated completion date is 2024.

11th Street Bridge Park. This is a public/private partnership under the leadership of THE ARTS to build a broad public pedestrian space with performance area, gardens, access to the river, and other amenities from one side of the river to the other on the piers of the old bridge. It is scheduled to open in 2019.

Poplar Point Transfer and Redevelopment. This is the area on the east side of the river above the South Capitol Street Bridge. It comprises 110 acres and is slated to be turned over to the city once the Park Service and the city agree on a plan for its development as a combined park and mixed development. Seventy of the acres are to remain as open space. Issues of toxic contamination on the site will require attention since it was a Navy disposal area, among other things.

DC Water Clean Rivers Project. This is the effort to deal with the frequent discharges of raw sewage into the river from the city’s combined sewer system due to excess runoff from storms. The solution being pursued is to store the combined effluent in large tunnels that feed it through the Blue Plains treatment plant once the storm has passed. The work is to be completed this year.

New and Ongoing Transportation Projects. These include a new South Capitol Street Bridge and access streets and roads, Barney Circle and Southeast Boulevard, the Pennsylvania and Minnesota avenues intersection, and the Kenilworth Avenue Study.

Contaminated Sites on Park Service Property. The key properties here are the Kenilworth Park landfill under the playing fields; Poplar Point mentioned above; the Washington Gas site on the west side above the 11th Street Bridge; and the river bottom.

Most of the remainder of the plan looks at management options by land type, starting with soils and sediments. The wetlands section explains that there are 105.4 acres on Park Service land, comprising half the wetlands in DC and the largest amount anywhere in the Anacostia watershed.

Other sections cover upland vegetation, floodplains, archeological resources, and cultural resources. This last grouping has a fascinating summary of the history and planned future for a number of areas where you may not have known important events took place. It includes the Kenilworth Aquatic Gardens; the Langston Golf Course Historic District, placed on the National Register of Historic Places in 1991 for the role it played in the desegregation of public facilities and clubs; the lower Anacostia riverbanks, where in 1932 the Bonus Army marched into the city to claim pension benefits for veterans of World War I and stayed in a tent city until they were burned out under orders issue by Herbert Hoover and carried out by Gen. Douglas MacArthur; and the Anacostia Field House, where the 1949 desegregation of the public swimming pool was a victory for civil rights. A lot has happened along Our River!

Finally, the plan takes a look at us, the users, and focuses on six groups who are a priority to accommodate in this “signature urban park.” The six are those seeking passive recreation like picnicking and fishing; those playing organized sports; athletes in training (running, biking, workouts, and aerobics); boaters; naturalists and environmental activists; and partakers of educational and cultural programs.

That is a lot to cover in a plan for the next 15-20 years along Our River. Take a look, make your views known, and above all get out and enjoy what the National Park Service is offering us.