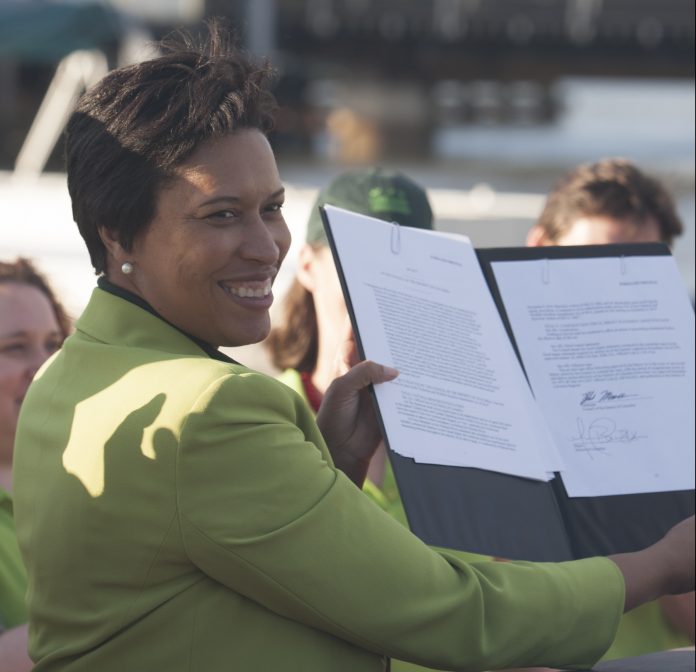 January marked the halfway point of Muriel Bowser’s current term as mayor of the District of Columbia, an opportune time to reflect on her environmental record. While environmental issues were not a central concern of her 2014 campaign, to the surprise of many environmental leaders – especially those focused on the Anacostia Watershed – the mayor has demonstrated a progressive environmental agenda.

Jim Dougherty of the DC Chapter of the Sierra Club notes, “Frankly, I’m impressed. She’s put some excellent people in place. She even attended the mayors forum on climate change in Mexico City last fall. We’re on the right track.”

Dougherty is not alone in his praise. “Mayor Bowser astutely continued many of the environmental and sustainability initiatives that were started in previous administrations – and built on many of these,” notes well-known East of the River environmentalist Dennis Chestnut.

Mayor Bowser embraced “Sustainable DC,” a District government-led plan initiated under the Gray administration to make DC the healthiest, greenest, and most livable city in the US by 2032. “The Bowser administration is continuing the tradition of environmental sustainability that other DC mayors such as Fenty and Gray started,” states Anacostia Trust Board Member Michael Stevens.

The Right People
It is with her appointments that Bowser has stepped out of her predecessors’ environmental shadow. She chose former Ward 6 Councilmember Tommy Wells, a rival in the 2014 primary, to head the Department of Energy & Environment (DOEE). Wells had authored legislation to remove trash from the Anacostia while on the DC Council.

Bowser then replaced William Howland, who had served two mayors as head of the Department of Public Works (DPW), with Christopher Shorter. Sharing Wells’ green orientation, Shorter has refocused his agency on waste reduction and recycling. Councilmember Charles Allen (Ward 6) believes that “Mayor Bowser has assembled a great team, with DOEE leading the way.”

The Making of an Environmentalist
What brought Bowser into the environmental fold? She certainly did not campaign on green issues in 2014. According to the mayor, the District’s wind-power agreement brokered in July 2015 through the DC Department of General Services (DGS) played a key role. The pact represents the largest wind-power deal of its kind for an American city. Approximately 35 percent of the District government’s electricity will be sourced through wind power over the next 20 years, saving DC taxpayers $45 million while significantly reducing DC’s greenhouse gas (GHG) emissions.

The wind-power purchase gained international recognition in 2015 when DC was awarded the global award for green energy by the C40 Climate Leadership Group at the Paris Climate Talks. “The award showed the world that DC is playing a global leadership role in green energy. I realized, ‘Well, that was easy enough.’ What else can we do?” Bowser concluded.

However, Tommy Wells, DOEE’s director, suspects that Bowser’s environmental roots run deeper. “She grew up here in DC and she’s obviously very proud of the city. We walk through a DC neighborhood together at least once a month. She’s genuinely concerned about trash and waste disposal issues that we come across. I think that concern has brought her into broader environmental issues.”

What Has Bowser Done?
Recognizing the impact that the DC government could play in reducing GHG emissions, Mayor Bowser expanded the purview of the DOEE to include more green energy initiatives. DOEE is promoting solar energy incentives for DC government offices as well as residences and businesses. A $100 million, five-year contract recently negotiated with the DC Sustainable Energy Utility (DC SEU) will provide green financial incentives and technical assistance to residents and businesses.

Influenced by Wells, an inveterate recreational sailor, the mayor is pursuing a swimmable Anacostia River with DOEE leading the way. Doug Siglin, executive director of the Anacostia Waterfront Trust, notes that “while many environmental issues are beyond the scope of DC, we can impact local water quality. The DC government is doing a good job.” The District is taking a holistic approach to its rivers, addressing the source of pollution and removing trash.

DOEE’s RiverSmart Homes Program and Bag Fee Law continue to reduce trash while raising funds for cleanup and education initiatives. Polystyrene (Styrofoam), which has long accounted for much of the river’s trash, is now prohibited in DC restaurants including food trucks and food service organizations. DOEE’s hands-on community cleanup efforts at sites such as Nash Run and Watts Branch Park have been very successful.

DC Water, led by former DOEE director George Hawkins, has been an important ally. Nathan Harrington of Ward 8’s Committee to Restore Shepherd Parkway notes, “The tunnels DC Water is building to hold excess sewage and stormwater during rain events until it can be processed at Blue Plains are a game changer. When complete, the amount of untreated sewage discharged into the Anacostia will be significantly reduced. While this project has been in the works for many years, it’s an important environmental milestone that’s happening under her watch.”

As a city framed by two free-flowing rivers, the District is vulnerable to flooding. The mayor has expanded the Sustainable DC program by creating “Climate Ready DC,” a plan for adapting to more heatwaves, severe storms, and flooding. The plan assesses the risks of climate change to infrastructure, public facilities, and people and identifies actions to reduce them.

The pioneering work at DOEE has been matched at DPW. While some DC food waste is diverted to energy and biosolids production at DC Water’s Blue Plains Facility, most is burned or ends up in landfills. With a residential “recovery” rate (amount of refuse diverted from landfills) of only some 20 percent, DC lags woefully behind other cities when it comes to recycling and composting. (San Francisco, Portland, and Seattle all tout rates upwards of 60 percent).

DPW under Shorter’s leadership is finally making environmental strides. It created a new Office of Waste Diversion that has recently published the “Mayor’s List of Recyclables,” a single, comprehensive list of recyclable and compostable materials for DC residents and businesses that will be enacted in January 2018. DPW (finally) has composting on its radar. This spring, composting dropoff locations will be established in each ward. Paint can now be recycled at a growing list of paint stores across the District through collaboration with PaintCare.org.

In late February Mayor Bowser joined DOEE Director Wells on the banks of the Anacostia to sign the Fisheries and Wildlife Omnibus Amendment Act of 2016. In addition to establishing the American shad (Alosa sapidissima) as the DC state fish, the legislation grants DOEE more authority to protect natural resources, regulate recreational fishing licenses, and increase environmental protection for aquatic species and areas of biodiversity. It also authorizes the mayor to impose penalties for the transport or trade of certain invasive plants and nonindigenous species.

What’s Next?
The environmental elephant in the room is how the District will deal with toxins in the Anacostia River. Harrington notes, “We still have toxic sites such as Buzzard Point, Poplar Point, the old Pepco plant, and Kenilworth Park that have yet to be properly cleaned up.”

While a Steering Committee for a Cleaner Anacostia has been created, there’s still much work to be done. Bill Matuszeski, retired director of the Chesapeake Bay Program and longtime Anacostia proponent, agrees. “The toxins in the Anacostia are being addressed slowly, but cheap solutions like capping the polluted sediments must give way to more expensive removal and disposal.”

Mayor Bowser recognizes the seriousness of the situation. “Before we can decide how best to clean up the Anacostia River, we must understand exactly what we’re dealing with. DOEE and the National Park Service have implemented the Anacostia River Sediment Project – to determine the amount, type, and source of the river’s contamination. Once the research is complete, we will put forth recommendations for how we can remediate these contaminants. The project is currently on track, and we expect recommendations to be made in 2018,” she says.

And there are areas for improvement. Environmentalists note that some restaurants east of the Anacostia are still using foam containers, as are some of the food trucks downtown. Many think that a bill giving value to plastic and glass bottles would also be welcome.

But Dougherty notes, “ultimately it’s climate issues that are really going to impact DC. The Climate Ready DC Plan and its analysis of flood prediction models to ensure that there are sufficient cooling/relief centers is a great start, but what about urging people to drive less and consume less energy? These elements really aren’t addressed in the plan.”

Harrington agrees. “A tremendous amount of energy is wasted in the District by leaving lights, computers, and copiers on at night and on weekends. A lot of people still seem to be totally indifferent toward energy conservation.”

Bowser also made one decision that has angered and disappointed environmentalists – with her support for the Pepco-Exelon merger. While she eventually withdrew her support, much damage was done. Councilmember Cheh (Ward 3) notes, “I consider the administration’s support of the Pepco-Exelon merger to have been a grievous misstep. However, Director Wells has promised me that DOEE will formulate an extensive energy plan, and I look forward to working with him on that effort.”

In late November 2016, and as a follow-on to the 2015 Paris event, Mayor Bowser attended the C40 Mayors Summit in Mexico City. The event was attended by Fortune 500 companies, representatives from various world governments, and prominent nonprofit leaders. There and on a global stage Bower reassured a nervous international audience that a presidential election would not sway a city’s conviction to green values. It was an opportunity for her to acknowledge just how important DC’s environmental work is.

Catherine Plume is a lifelong environmentalist, a writer, and a blogger for the DC Recycler: www.DCRecycler.blogspot.com; Twitter @DC_Recycler.