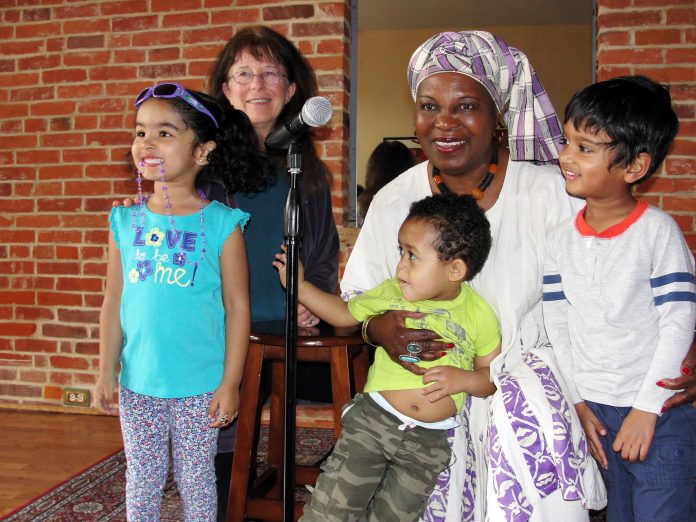 The Corner Store has long been a place for storytellers to come together at monthly open mic nights to share their latest work with a welcoming audience. Late last month, the neighborhood creative space invited a very different group of performers to take part by sharing stories from their lives: children.

Families were invited to take part in an open mic on Feb. 25 by sharing five-minute tales they crafted based on their own lives. The organizers and participating families hoped to hone their storytelling and public-speaking skills, while the kids had some fun.

A Fun Way to Learn
Organizer Vera Oye Yaa-Anna has been working with children on storytelling for several years. When she became the DC liaison for the National Storytelling Network, Yaa-Anna found that the children she worked with were having a hard time expressing themselves. She immediately recognized the role storytelling could play in helping them develop those skills, in part because of the importance of storytelling in her native Liberia.

“Storytelling is the oldest form of education,” she said. “In Liberia storytelling was a method of passing down beliefs, traditions, and history to future generations. Stories are at the core of all that makes us human.”

She established an open mic night out of her own home, but when that became difficult to organize she partnered with Oye Palava Hut, a West African cultural center that invites children to learn storytelling skills. As part of her work with Oye Pavala Hut, she works with kids across the DC Public Schools to help them shape their stories and their performances.

Her partnership with The Corner Store gave kids on Capitol Hill the opportunity to get on stage and share a little about their lives with peers and members of their community. The rules were simple: kids had five minutes to tell an original story that drew on their own lives.

One boy who was excited to take part was Raghav Sarawgi, barely four years old, who has been telling stories for about half his life. His interest in stories started around age two, when he made a game out of the stories his parents would tell him. “He loved hearing stories from us, especially of day-to-day events once we came back home from work, and then recreated them with his toys,” said his mom, Tina Sarawgi.

One of the retellings, “The Bump,” became a household favorite. After being told about a fender-bender his mom suffered one day, Raghav would act out the entire story with his toys for any audience he could find. He shared every detail – from the passengers in the SUV that rear-ended his mom’s car to the officers who responded to the accident to the rental car the family used for a month.

That early story showed not only how well Raghav understands the world around him, but his interest in stories tied to real-life events. Although “The Bump” is no longer his go-to tale, he remains interested in stories that are grounded in reality. His favorite is an ongoing story about a family of world-traveling ants. “These days, every time we sit for a meal, we take an ant family on a journey to any place we choose, especially those we have visited before, integrating the experiences in these places into the story,” Sarawgi said. “When we asked him why he liked the ant story, he said, ‘Just so that I can learn more about the countries.’”

Lessons for a Lifetime
For a natural storyteller like Raghav, the opportunity to share stories with an audience was something his parents were thrilled to find. The work done with the children ahead of the open mic was also of great value. “The open mic event seemed like a perfect platform for Raghav to share his enthusiasm of storytelling,” Sarawgi said. “The supportive and nurturing environment, hearing stories from other young kids, and Vera’s leadership have been amazing.”

According to Yaa-Anna, the outcome of getting kids on stage to tell stories is multifaceted. On one hand, kids are able to reflect on their own lives and have fun. On another, they are gaining skills that can serve them in numerous ways throughout their lives. “This setting and approach will foster self-confidence, critical thinking, creativity and teamwork, as well as build essential literary and self-affirming performance skills,” she said.

Yaa-Anna has the kids do more than just read a story they have written. She wants to ensure that they engage not only with the material, but with their audience, adding a social factor that can be missing from simple recitation. “Without the book as a barrier, the [story]teller looks directly into the eyes of the audience and is free to use gestures, facial expression, and body movements to enhance the telling and help children understand the story better,” she said. “The reader sees only the words on the page, while the storyteller sees the wonder and excitement on the faces of the listeners.”

For Raghav, events like the open mic are fun nights out, although his enthusiasm for storytelling can be a little overwhelming. “During one event he wanted to keep going back to tell stories of the most ordinary things in his life, such as waiting for a bus or watching a squirrel. We had to pull him back to give other young storytellers a chance,” Sarawgi explained.

Seeing her son on stage is a joy for Sarawgi, in part because of how much he enjoys it. For her, the value it brings to his and other children’s lives is simple, if far-reaching. “I think it offers the children a friendly place to talk and be heard, and in the process get a chance to find their inner voice and confidence. I think it is a truly empowering experience,” she said.