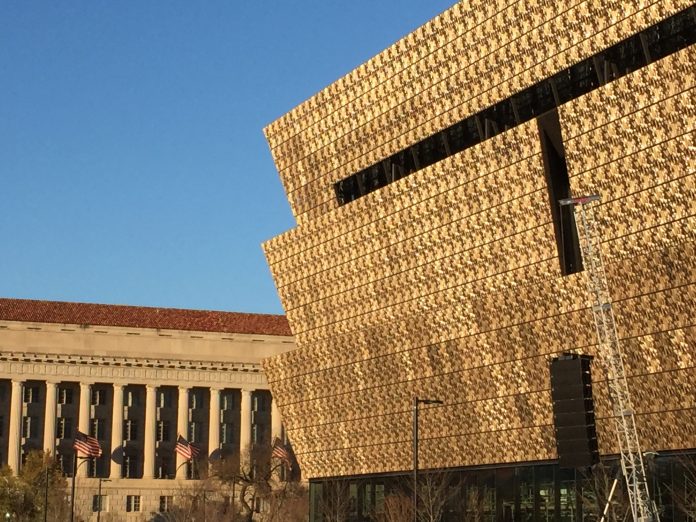 The month before Donald Trump was elected president of the United States the National Museum of African American History and Culture (NMAHC) opened its doors. This newly built institution should serve as a watch tower from which to view the next four years. Too often we read history books while suffering from amnesia. Our eyes read words and paragraphs but we fail to comprehend the narrative that can grab ahold of us like a ball and chain.

After the November election many could be seen openly weeping as if another young black boy had been killed in the street. There are many types of crimes, and too many are never solved. Will we ever truly know how or why Trump won? Speak too much Russian to me and I’ll begin to write my notes from the underground.

It might be too easy to believe our nation has moved from reality to becoming a reality show. I would prefer to believe we’ve simply embraced science-fiction as a way of life. When do the aliens arrive? Will they laugh when they say, “Take me to your leader”?

If you visit the NMAHC on the corner of 14th and Constitution be prepared to stay for a spell. Make this place your temporary home or shelter. There is no way you can weave from the ground floor to the top without being moved, angry, encouraged, inspired, and hopeful. You will leave this museum empowered and ready to continue the struggle waged by our ancestors.

Now is the time to hold high the torch of freedom and feel the heat of righteousness. It would be foolish to think an entire movement can be derailed or stopped by one man with a Tweet. Yes, Trump was elected, and we wish him well, but let us not forget what Bernie Sanders mentioned in his book “Our Revolution: A Future to Believe In”: “This campaign was never just about electing a president of the United State – as enormously important as that was. This campaign was about transforming America.”

Stand anywhere in the National Museum of African American History and Culture and be reminded of how African Americans transformed America. Stand near the new plaque at the Williams Slave Pen and you morph into Solomon Northrop pondering how many more years of remaining a slave. Free a man, free a colony.

Change must be for the many and not just the few. We must expand the American living room, a struggle which comes after years of fighting to open schools, restaurants, and housing opportunities. As a new Republican government begins to rule with a ruler for cutting the federal government – let us push for statehood in the District harder than ever before. If states’ rights are back in vogue, let us be a state. Citizenship requires a free mind and not tied hands. Congress should not have the final say over the desires and dreams of DC residents. We must refuse to be ruled from any tower which is not our own.

During the next four years Washington could lose the luster of being the political capital and become a “Palin” runner-up to the Trump Tower in New York. What’s a presidential White House if the president is never home? Meanwhile, how many District residents will not miss the speeding limo, the police cars, and the diverted traffic?

Somehow, I can’t see President Trump stopping in at Politics and Prose or even the nice little East City Book Shop on the Hill. Oh, and what will happen to Washingtonian societal life? Who will we gossip about? Will there still be a need for a guest list? How many of us now reside in the shadows of the Trump Tower and eat with the help?

Meanwhile the blues remind us of the need to be resilient, to find ways to live and cope, or maybe it’s time to play Duke Ellington’s sacred music. At the end of the week comes Sunday and we must be believers.

Our nation can survive another Reconstruction and the backlash blues Langston Hughes wrote about. America is a complex nation of beautiful notes. I still hear America singing – not just the poetry and melody of Walt Whitman but the complicated compositions of Thelonius Monk. Yes, Tweet Thelonius, for this is the 21st century, and we are a city on the move.

Just a few weeks before Donald Trump was to place his hand on a Bible, I wrote the poem “American Oven.” I walk the streets and speak to friends and strangers about the strange politics of now. I take comfort in believing the changing weather is always an omen for goodness, and that our city is witness to another chapter in history, a chapter in which our differences don’t bend or tear the pages.

The city of Washington is great, as is our nation. It has always been this way.

The American Oven
So what is this greatness that I smell?
Is it the smell of fresh warm bread, the sweetness
from flowers, the seductive smoke of cigarettes,
the print of newspapers and newly published
books? What is this odor of greatness swirling
around our nation’s sky? Does it touch the workers
in stores and factories, the children in locker rooms
after games, the women bowed in churches
before the caskets of the dead? What smell
embraces the earth of things, blue, brown and
in between? This American greatness, this burning,
this terrible thunder, this smell so unsettling
to the ear, this blinding pride and arrogance,
this hollow victory over dissent, which we cover
with flags, pious gestures and salutes, this burial
of being first. What must be great again is what
is found that wasn’t lost. This smell so invisible
to the poor, so tasteless to the rich, this fragrance
of freedom once inhaled by slaves, this smell
of hope, this endless hunger for tomorrow,
so choking and undefined.

Writer and literary activist E. Ethelbert Miller hosts “On the Margin” every Thursday morning at 9 a.m. on WPFW (89.3 FM). He was awarded the 2016 George Garrett Award for Outstanding Community Service in Literature by the Association of Writers & Writing Programs. “The Collected Poems of E. Ethelbert Miller,” edited by Kirsten Porter, was published by Willow Books in 2016.