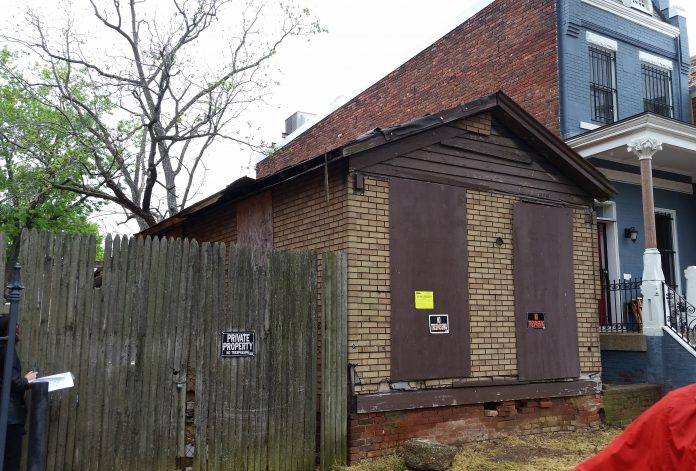 The decades-long dispute over the shotgun house is over. In January what remained of this historic structure, built sometime before 1853, was dismantled as part of an agreement forged with the owner-developer SGA properties, the Office of Planning’s Historic Preservation Review Board and the powerful Capitol Hill Restoration Society.

What gives this agreement its glue is the condition that what remained of the historic house would be “disassembled” and carefully preserved for use in the two-unit residential development piece of the new 120 units under development at 12th and Pennsylvania Ave SE.

A shotgun house is a narrow rectangular domestic house usually no more than thirteen feet wide with one room behind the other. It was the most popular style of house in the southern United States from the Civil War until the 1920s.

One version for how the Shotgun House got its name: you can fire a shotgun straight through the front room and out the back door without hitting a wall.

A previous owner, Larry Quillan, tried repeatedly to tear the Shotgun House down and develop the property. CHRS stood in opposition to his plans (a view which was supported by the District government’s Historic Preservation Review Board), and the matter remained in stalemate until its recent sale to developer SGA.

SGA subsequently negotiated a package that satisfied the community, with CHRS occupying the principal role in these conversations. In August 2016, HPRB approved a settlement that has allowed the development to go forward that is linked to the Frager’s development project on Pennsylvania Ave SE.

The Agreement
As part of this agreement, what is salvageable of the deconstructed shotgun house will become a part of two residential units being restored with the salvaged material being used wherever viable.

Asked about why the shotgun house is and was so important, former HPRB member Nancy Metzger said, “We will learn how the less affluent lived in the days when this house was built” at what was once was the edge of Capitol Hill.

Metzger also points to the valuable “dig” that is currently ongoing at the property, supervised by City Archaeologist Ruth Trocolli now that the house is dismantled.

Elizabeth Nelson, currently the President of CHRS, notes that “the house has been carefully disassembled and inventoried so that it can be restored on the site.” Asked if the resolution of this long standing community issue has come to a good outcome, Nelson responded: “I would think so.”

In response to the promises made by the new developer-owner SGA and their trustworthiness, Nelson said: “They are upholding their end of the agreement. There is nothing that I have seen that tells me they are not going to do what they promised to do. “

CHRS promises to continue to have an interest in the shotgun house project. According to Nelson: “We will certainly be watchful during the next phase of its life. As far as we know it is in good hands and things are proceeding as they should. “

The Dig
Ruth Trocolli, City Archaeologist for the Office of Planning, enthusiastically describes a potential treasure trove of mid to late 19th century findings, among them broken dishes and glassware as well as animal bones with butcher’s cut marks on the bones.

Trocolli has set up a special Facebook site, DC Archaeology, for those interested in updates. She points out that the real work did not begin until shortly after Christmas when the property was safe to begin the excavation or what are Trocolli calls “ground disturbing activities.” Trocolli suggests that the work, which will cover the three periods of construction of 1850, 1887 and 1923, is expected to uncover a well or privy, as well as a large amount of unintentionally disposed trash, considered archeological crown jewels, that fell through the floor boards.

According to Trocolli, the first owner sold the shotgun h ouse in 1857. The seller was a Germanmerchant with a shop on 12th St. He sold the property to an illiterate German immigrant peddler as listed in the city directory. There was a brewery in the area by 1850.

The dig site currently has a trained working group of five pro bono workers as well as volunteers.

In explaining the dig’s purpose, Trocolli says: “What we are looking at is discovering what the daily life of immigrants on Capitol Hill was like. There were row houses and shotgun houses. These were not where the rich and famous lived. These were the working class people who built ships, who coal and who brewed beer. We hope to find evidence of what they ate, what they did in the house.“

Stay tuned for updates on the new structure and the findings from Trocolli’s dig. 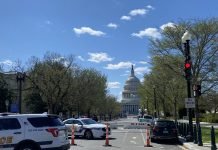 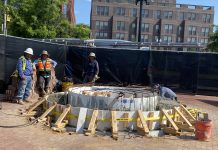