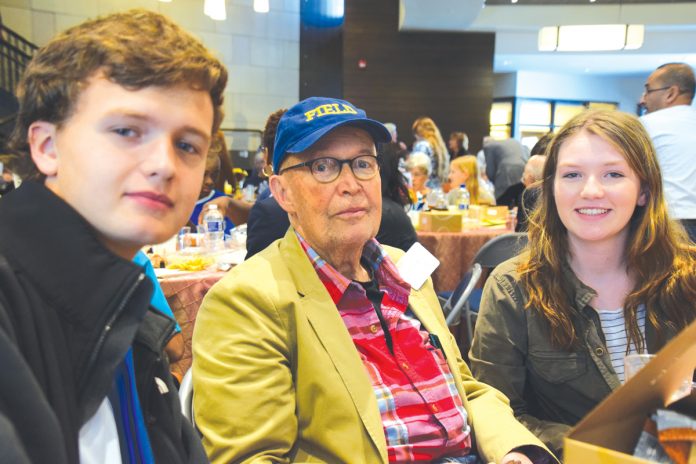 Bart Barnes, longtime resident of Capitol Hill, is known as a loving husband, father, grandfather, and much admired caring neighbor. He is also appreciated for his stellar career as a Washington Post journalist at the center of reporting for over 50 years. His humorous “retirement” reflection in the July 26, 2013, Post is a worthy precis of his notable contributions (washingtonpost.com-bartbarnesretirement).

My urge to profile a friend and fellow Nationals fan comes from his pastoral sensitivity as an obituary writer at the time of the passing of my father, Dr. G.N. Getman. Bart has a well-developed conviction about “careful listening for the back stories.” It has been, he says, a “good way to spend my life.” After Yale and a six-month stint in the Army Reserves, he took his first job as as a cub reporter writing one-sentence obits for two years at the Holyoke Transcript-Telegram. Lucky for all of us, there was an opening in 1963 when he approached The Washington Post.

His courage to “be myself and nobody else” began early on the knee of his grandfather, himself a notable New England editor and publisher of the Bristol Press. Arthur S. Barnes, who modeled what it meant to be a loving grandfather, started working there in 1892 and gradually gained ownership. He died on Christmas day 1956. To the persistent lap dweller of his Sunday afternoons, Grandfather Barnes read books like “David Copperfield.” Mr. Murdstone was the worst character in the world to young Bart, worse than Tojo, Stalin, or Hitler because of the way he treated the orphaned David. Grandfather’s lap and books with moral lessons and models were safe places in a frightening world. Bart notes, “There were other influences, but Grandfather was the greatest.”

When asked who else was a mentor he recalls his eighth-grade teacher, Miss McCabe, all five feet of her, armed with a threatening yardstick for slapping students’ desks. “She taught me what a sentence was by diagramming nouns and verbs. College teachers are the prestige professors who teach subjects. High school teachers teach life.”

Bart’s father succeeded his grandfather as the Press owner from 1956. He had the editor ask if Bart wanted to return in 1973 to own the Press. However, the senior Barnes understood Bart’s desire to avoid the complexities of the family business. “He was good and did not pressure,” leaving Bart free to pursue his separate identity established during the post-riots period of assassinations, Viet Nam War, marches on Washington (and soon Watergate). One of his major bylines was on the initial Watergate article. It was preceded by hundreds of others, on politics in Maryland and Virginia and antiwar protests during the Vietnam War. And then he was the rewrite man on the Woodward and Bernstein story, putting together writing filed by six or seven other reporters. That byline went to Alfred E. Lewis, the Post’s veteran police reporter. Bart explains, “You might want to note that the editor asked me to write the story, not on the basis of merit or talent, but simply because that afternoon in June of 1972 I happened to be in the office and available.”

Many of us in the neighborhood during those days remember Bart at our children’s soccer games with the Barnes children, Kate, Michael, and David. Bart recalls that longtime rector Jim Adams at St. Mark’s, his parish church, used to say, “One should always have three generations at the Thanksgiving tables.” For the Barnes family, true to a hundred-years tradition, a few of those dinners even had four generations present.

Stephanie Deutsch, now Bart’s sister-in-law, reminisces, “For years Bart and Linda were neighbors on East Capitol Street. A lot of our interactions happened on the sidewalk where I’d see him with his backpack on his way to work. I saw him walking with his father, who was over 90, with his grandson Sammy, who was then about two, who looked like Bart. In later years I saw Bart on his way to Grubbs to pick up medication for Linda [who died in 2006]. He was and is a real family man. And now that he is part of my family [married to sister Jennifer] I really have a chance to appreciate that!”

Though little known among Bart’s friends in the 1960s, he and Linda were part of the first experimental protocols at the National Institutes of Health fertility clinic. An early trauma sensitized Bart to human-loss stories as their initial menotropin “pergonal pregnancy” was with quintuplets! Sadly the three girls and two boys were miscarried. Happily Kate and twins Michael and David were later results of the treatments.

Now Bart’s best counsel to grandfathers is, don’t “get feathers ruffled if no one pays any attention to you.” Continue to “be yourself” as his father and grandfather certainly encouraged. Through the years he learned and practiced the lesson shared by Washington Post obit editor J.Y. Smith, who raised company standards by suggesting, “Just get good stories … obits are not about death. That is the occasion, but they are about life.” Bart’s reflection on that advice is pertinent. “You have to be around to know who people really are. You have to listen to people who just need someone to talk to … not to merely get the basic facts and say abruptly ‘Ok, got it. Goodbye.’”

Deutsch adds, “Bart relishes the opportunity his work gives him to look at people’s lives, not just through the prism of their professional careers but through the small stories that bring them to life. What small decision changed their lives? He truly cares about people and how they have become who they are.”

It was the case in my own life on the occasion of my father’s death. The funeral home director asked me, “Have you talked to the obit reporter at the Post? We hadn’t thought of it. He dialed the number and Bart answered. What a lenitive and soothing voice of compassion he was to our grieving family. The obituary he wrote revealed the accomplishments and more importantly the character of my father, as a developmental educator of special needs children and a mentor to professionals around the world. We are eternally grateful for his ministrations to us. By his example many others – clients, friends, and colleagues – have been recipients of his humanity. He has listened well.

Longtime friend Richard Rubenstein underscores Bart’s conviction: “Bart Barnes is playfully, almost mischievously, wise like a Buddhist sage in Episcopalian clothing. Combine his ultra-broad interests with irrepressible humor and you get unpredictable results, like a contest in honor of a milestone birthday to create ‘The Bart,’ composed of edible symbols of his life [in the hopes of being another namesake Lord Sandwich]. Or a church course taught by the maestro on the theology of baseball.”

Typically Bart’s irrepressible humorous response to our conversation and the resulting recollection was, “It almost makes me look saint-like, which might be a slight exaggeration. I’ve made plenty of mistakes and had my share of falling short of the mark … just as long as I don’t take my own canonization too seriously.”

And Bart’s final word to me: “As I have wondered about ‘end of life’ and science and faith, especially as grandchildren reach 16 or 17, I’ve come around to facing that I love them more than they love me. So I hope when they are my age they will experience what I have and have a grandchild/child to enjoy in the way I do.”